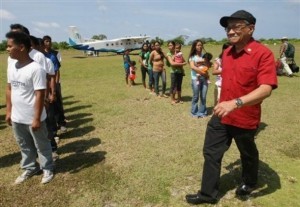 PHILIPPINE Congressman Walden Bello, right, walks past local residents and municipal employees of Pagasa Island, part of the disputed Spratly group of islands, in the South China Sea located off the coast of western Philippines Wednesday, July 20, 2011. China protested a trip made by Filipino lawmakers to disputed areas in the South China Sea to assert the claim of the Philippines. Ethan Sun, spokesman for the Chinese embassy in Manila, said the trip scheduled was â€˜against the spiritâ€™ of a code of conduct signed by claimants to the areas in 2002. The Spratlys, believed to be rich in oil, mineral and marine resources, are also claimed in whole or partly by Brunei, Malaysia, Vietnam and Taiwan. (MNS photo)