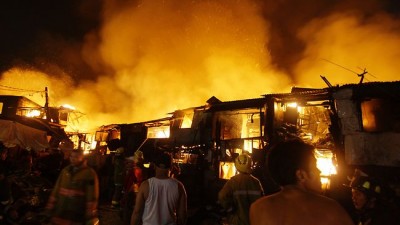 MANILA, February 15, 2011 (AFP) – Around 10,000 people lost their homes and a child was killed Tuesday after fire razed one of the Philippines’ largest slums, authorities said, in the latest disaster highlighting Manila’s widespread poverty and urban blight.

The blaze ripped through the sprawling Bahay Toro slum, leaping from house to house and burning ferociously for three hours before firemen could get it under control, residents said.

The cause of the blaze was unknown, fire inspector Catherine Albino said, adding the flames destroyed about 500 shacks each housing extended families.

A five-year-old boy was killed, six other people were injured and about 2,000 families were left homeless, Albino told AFP.

Some of those families Tuesday pitched makeshift tents near the devastated slum as charities distributed rice and noodles.

Sitting under a tarpaulin with her three unemployed adult children and four young grandchildren Morena Leoncito, 58, said she was worried about food and shelter for her family over coming days.

“We lost everything except the clothes on our backs. Our first priority had to be the children,” the widow told AFP.

Her family did not want to join several thousand survivors crammed into a covered basketball court several blocks away.

Slum fires are a frequent hazard in the Philippine capital of 12 million people, highlighting Manila’s sprawling poverty and the cramped, dangerous conditions in which poor families often live.

On January 29, fire struck another densely packed slum in Manila district of Navotas, killing 12 people and destroying some 100 shanties, the authorities have said.

“Somebody gave us food but we have no appetite, thinking about the house we lost,” Erabon told AFP.

“If somebody gives us roofing sheets we might be able to put up something,” she added.

Like their neighbours the Leoncitos, the Erabons moved into the creekside Bahay Toro slum in the 1970s as economic migrants from the provinces, surviving the deadly floods from Tropical Storm Ketsana that killed 400-plus people across Manila in 2009.

The World Bank has said that 40 percent of the population of the Philippine capital are informal settlers living in shanty towns. Many depend on contract work and are unemployed for several months of the year.

One in four Filipinos live on a dollar a day or less, according to the latest government poverty data released earlier this month.