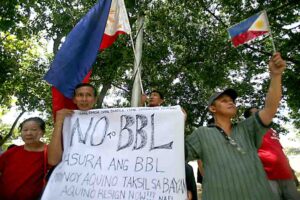 MANILA (Mabuhay) – At least 12 senators have already signed the committee report drafted by Senator Miriam Defensor Santiago stating that the Bangsamoro Basic Law should be substantially revised if it is to withstand legal scrutiny before the Supreme Court.

With the signatures of the majority of the 14-member Senate committee on constitutional amendments and revision of codes, Santiago transmitted the report to the committee on local government, the primary committee contemplating the BBL and chaired by Senator Ferdinand Marcos Jr.

Santiago said Senator Antonio Trillanes IV, another vice chair of the committee, is out of the country and had no chance to review the report. On the other hand, detained Minority Leader Juan Ponce Enrile, also an ex-officio member, did not sign because he has not studied the matter fully, according to his staff.

“By affixing their signatures in the committee report, senators are agreeing with the conclusion that the present BBL draft is essentially unconstitutional. I expect that more of my colleagues will adopt the same view on the Senate floor,” she said.

Santiago stated in her committee report that if BBL is approved in its present form, it will be challenged in the Supreme Court for doubts on its constitutionality, particularly on issues of sovereignty, autonomy, the creation of a sub-state, and territorial integrity.

“The Bangsamoro Basic Law has much merit, but its promulgation requires constitutional amendment or revision; mere legislation will not suffice, and will spark Supreme Court litigation,” said the report, which was released to the media last week.

Santiago’s committee findings will either be consolidated with the reports of the committee on local government and the committee on peace, unification, and reconciliation, or adopted as an individual report. Either way, it is expected to form the basis of plenary debates.

Marcos earlier said that he will give due important to the findings of Santiago’s committee.

“We will certainly take serious consideration of the warning flags the report has raised,” he said.

He also sees no reason to rush the passage of the BBL as he is set to conduct a final hearing on June 3 before writing the committee report.

Santiago said after committee deliberations, the bill will enter a potentially grueling period of amendments before being subjected to a plenary vote.

“Newspapers have predicted that the report of my committee will slow down Senate proceedings on the BBL draft. If so, then the report would have served its purpose. We need to consider the BBL with caution, not with haste,” she said. (MNS)

Time Is Money When It Comes to Healthy Eating