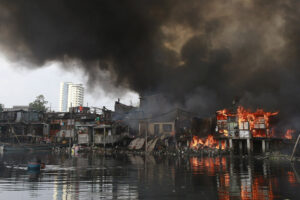 — A resident (left) wades on a river with their belongings while a fire razes a residential area in Tambo, Paranaque City on Thursday. At least 50 houses made of light materials were destroyed by the fire, affecting 150 families according to a Bureau of Fire Protection (BFP) official.(MNS photo)

ZAMBOANGA CITY, Oct 31 (Mabuhay) – Fifteen people, including six children, perished while 13 others were injured in a fire that hit this city’s old public market Saturday dawn.

Estimated worth of property damaged was placed at PHP8 million.

Zabala said the fire broke out around 2:45 a.m. Saturday in one of the stalls owned by a certain Mannan and rapidly spread to the nearby stalls.

Zabala said the fire has reached third alarm status in few minutes after it broke out.

Investigation showed the fire started when the amber from an electric post that sparked fell into a stall of used clothing.

“Apparently it was a spark in the (electrical) wiring,” Mayor Ma. Isabelle Climaco-Salazar said as to the origin of the fire.

Salazar said the other stalls that were razed were selling marine products and vegetables.

Salazar noted that some of the stalls were constructed illegally by the occupants.

She said the victims who were killed and injured were among the people staying in their stalls while some had just stayed overnight as they were scheduled to travel to Jolo, Sulu.

Salazar said the injured victims would be transferred to the Mindanao Central Sanitarium in Barangay Pasobolong, this city, “so that they will be given better medical assistance.”

Salazar said she has instructed City Social Welfare and Development Officer Socorro Rojas to provide the necessary assistance to the victims.

Survey finds many Americans nodding off away from bed

Theatrical Performance on Call Centers in the Philippines: “Dallas Non-Stop”