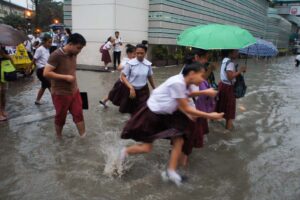 High school students from Araullo High School wade through knee-deep flood at the corner of Taft Ave. and United Nations Ave. in Manila due to a sudden downpour caused by thunderstorm, on Thursday afternoon. The government faces criticism for its failure to address the flooding and traffic problem in Metro Manila. (MNS photo)

During the presentation of the DPWH proposed 2016 budget at the House of Representatives appropriations committee hearing, Singson said the Blumentritt Interceptor Catchment Area and the Mandaluyong Main Drainage Project and would be completed in March and June 2016, respectively.

Singson said the project incurred traffic in the area because the 3.3-kilometer catchment area was being built under the road from Blumentritt in Manila to the Tondo area.

“In Blumentritt area, it’s a 3.3 kilometer long drainage … In Mandaluyong, the whole of Boni gets flooded with a little rain… These won’t get finished overnight. We’re doing it in existing roads so the water goes out to the Pasig river. We expect two major improvements to be finished April or May next year,” Singson said.

“The projects were undertaking are not easy projects because they pass through major thoroughfares in Metro Manila,” he added.

Singson said the DPWH had to address the flooding in the areas under the Metro Manila flood management plan because it covered 20 million people and a third of the country’s gross domestic product.

He added that some 12,000 informal settler families had been relocated from the waterways to restore the carrying capacity of the waterways.