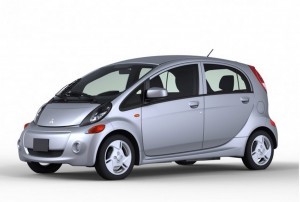 In naming the 2012 Mitsubishi i to the 2012 list of â€œ10 Best Green Cars,â€ Kelley Blue Bookâ€™s kbb.com proclaimed that â€œthe newest all-electric car on the block is also the least expensive and has the best mile per gallon equivalent of them all.â€

The 2012 Mitsubishi i has a starting net value of $21,625* for the well-equipped entry-level ES model (the premium-grade SE version begins at $23,625*) and has been rated the #1 most fuel-efficient vehicle in the Environmental Protection Agency (EPA) and the Department of Energy (DOE) 2012 Fuel Economy Guide with a fuel mileage rating of 112 combined/126 city/99 highway MPGe (miles per gallon equivalent).

According to TheDailyGreen.com, the 2012 Mitsubishi i â€œleads the pack both for fuel-efficiency and cost, and ranks as the most fuel-efficient car of the year.â€

TheDailyGreen.com is a popular consumerâ€™s guide to green living, providing daily news, tips, features and more, and is published by Hearst Digital Media, a unit of Hearst Magazines.

But for those who are loyal to Mitsubishi, you can now avail of your favorite Mitsubishi brand by visiting Cerritos Mitsubishi where our kababayans will help you choose the right car for you, whether it’s the Mitsubishi I, Outlander, Lancer or other Mitsubishi vehicle.

To Mark and his crew if you are a kababayan that means you are extra special. Even their marketing thrust is anchored on that magical Tagalog word. They have a Kabayan Price, which is a special discounted price, and the Kabayan Service, which is a $54.95 value service coupon that entails nine minor jobs.

And then some. Like the change of the season, for example, calls for the Kabayan Spring Special at the new Cerritos Mitsubishi.

â€œWe have the best lease payment program, we offer huge discounts on many of our models,â€ said Mark.

â€œAnd for new immigrants, first time buyers, and those without credit or are now having a bad credit just like everybody else, approval is not a big deal. We have a way of doing it.â€

Along with Angelo Munoz, Jovi Manalang and Eugene C., Mark backstops the sales operation for the Filipino market.

The salespeople of Long Beach Mitsubishi

â€œIt is not the best job in the world, but it is very challenging,â€ said Mark. â€œFil-Am carbuyers can be very demanding. You have to have knowledge of the Pinoy psyche in order to survive the test.â€

And survive he did. Mark now enjoys a loyal patronage from the sizeable Filipino households in Long Beach and the South Bay area. And as recognition for that constant patronage, LB Mitsubishi has included in the deal the $500 â€œLoyalty Rebateâ€ for repeat customers.

And if you buy it soon, you will probably be able to lock in the 0% financing that is on a promo offering right now.

The same is true with the Outlander Sport, the Galant and the Endeavor. Also, the pre-owned inventory special has never been as impressive as it is right now. Check them out today if this is what you need. Call our kababayans toll free at 1-888-887-6090.

Philippines to remain under Alert Level 2 until yearend