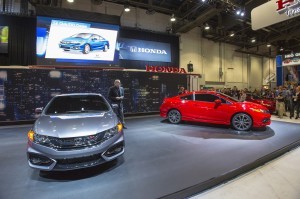 A significantly updated 2014 Honda Civic Coupe (http://automobiles.honda.com/2014-civic/) made its world debut at the 2013 Specialty Equipment Market Association (SEMA) Show, offering a first look at new exterior styling updates to America’s best-selling1 compact car. Honda also announced that the performance-oriented Civic Si will benefit from increased power and larger wheels and tires, making both the two- and four-door varieties even more fun to drive.

“With the further advancement of the 2014 Civic Coupe and Si models and an exciting path forward for performance parts drawing on our racing experience we are making a statement about our commitment to the fun to drive character of the Honda brand”, said John Mendel, executive vice president auto sales for American Honda Motor Co., Inc.

The Civic Si Coupe benefits from the same styling enhancements as the standard Civic Coupe but adds Si-exclusive design cues, including a unique lower front bumper garnish, larger rear decklid spoiler, a distinctive front spoiler and sporty rear air diffuser. The Civic Si Sedan picks up on these same cues, and both the Si Coupe and Si Sedan get larger, 18-inch (+1 inch) wheels and tires with new wheel designs.

More details about the full 2014 Civic lineup will be made available at the upcoming Los Angeles Auto Show.

For a closer look at Honda vehicles, give our kababayans Simon Sigua, Mira de Mira, and Lotta Ferraren a call at the Filipino Department 866-630-0734 Call or stop by the dealership and see them in person at 6511 Santa Monica Blvd. in Hollywood, California 90038.

The family-owned Honda of Hollywood has been serving Los Angeles and the Filipino community for 45 years. This is why, service at Honda of Hollywood is incomparable and top-rated as they value people’s satisfaction first. Of course, getting Honda vehicle – which leads all other brands in quality – helps a lot.

Reid basks in victory of ‘hope over fear’