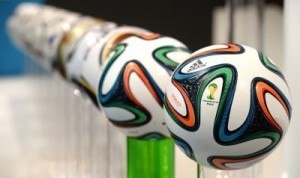 (LOS ANGELES-AFP) – The official 2014 World Cup game ball should make players happy, NASA said after its own aerodynamics testing showed the new design avoided the pitfalls of the unpopular 2010 version.

Players complained the official Jabulani ball from four years ago was too unpredictable — a result of the almost perfectly smooth design, which meant that the airflow over the ball pulled it in unpredictable directions.

Although some strikers were able to take advantage of the trait, the erratic trajectory drew complaints from goalkeepers who had trouble gauging where to block.

With memories of 2010 still fresh, Adidas — which designed and manufactured both balls — worked to create a more predictable piece of sports equipment this time around.

“Adidas spent two and a half years developing and refining the ball, making it the most tested ball we have ever created,” the company wrote in a product description posted on the FIFA website, where the balls sell for $160 each.

“There is a thin layer of air that forms near the ball’s surface called the boundary layer, and it is the state and behavior of that layer that is critical to the performance of the ball,” explained Rabi Mehta, chief of the Experimental Aero-Physics Branch at NASA’s Ames Research Center in California.

The tiny bumps and deep seams disturb that layer of air, Mehta said, which reduce the low-pressure wake behind a ball that slows it down.

He demonstrated the effect in a wind tunnel in the lab, releasing laser-highlighted smoke over the ball at different wind speeds to demonstrate the flow patterns.

For the 2014 ball, that effect happens at speeds of around 30 miles (48 kilometers) per hour — and is much less noticeable at 50 to 55 miles per hour, the typical kick speed of a World Cup player.

The reverse was true of the 2010 ball, Mehta said.

“The players should be happier with the new ball,” he predicted. “It is more stable in flight and will handle more like a traditional 32-panel ball.”

The deal is off: NJ Nets end talks with Carmelo Anthony