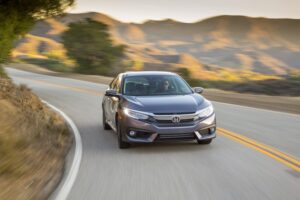 The new Civic brings an elevated level of comfort and convenience to an affordable, compact-class car, with numerous Civic firsts and standard or optional premium features typically found in more expensive vehicles. From the convenience of available Smart Entry and Pushbutton Start/Stop to the ease of use of the new electric parking brake and Hill Start Assist, the Civic offers useful technologies that make driving easier and more convenient.

Smart Entry
Smart Entry also allows the driver to approach, open and use the trunk without using a key or pressing a button on the remote. With the remote in his or her possession, the driver simply presses the release button and opens the trunk. As a safety and convenience feature, the Smart Entry system will not allow the transmitter fob to be locked in the interior of the Civic.

Remote Engine Start
Civic EX trims and above feature standard remote engine start. This enables drivers to start their Civic in advance of the drive, thereby activating the climate control system with a target temperature of 72 degrees before they get to the vehicle – particularly helpful in extreme hot- or cold-weather conditions. The system will automatically operate the heater, front and rear defrosters, front heated seats (if equipped), heated side mirror, and air conditioning as needed.

The remote engine start feature is built into the key fob supplied with the vehicle. To start the engine remotely, the owner presses the LOCK button and then holds the ENGINE button for a second. The Civic’s hazard lights will flash, indicating that the signal has been received. When the engine is started remotely, the wipers, lighting and audio systems remain off, and the security system remains set. The engine will run for up to 10 minutes after remote starting and can be extended by another 10 minutes using the same procedure, and then shut off automatically if the owner doesn’t reach the vehicle within that time. When the owner does get to the Civic within 10 minutes, or extended period if the procedure is initiated a second time, the engine will keep running while the owner unlocks the vehicle, gets in, applies the brake and presses the Civic’s START button, which turns on all of the vehicle’s systems.

Driver Preferences
The Civic EX and above trims come with two keyless remotes with unique identifiers. Each remote can be set with unique profiles to accommodate the individual preferences of two different drivers. The available preferences include driver seat and mirror positions. Other preferences include audio system pre-sets, air conditioning preferences, and navigation system settings. In the event both owners use the car at the same time, the Civic will recognize the keyless remote that approaches the driver’s door first.

Locking
After parking, a press of the LOCK button on the remote will simultaneously lock all the doors and trunk. On EX and above trims a touch of the soft-touch lock button on either front door handle locks all doors and trunk to secure the Civic. The system will not allow the remote to be locked in the interior of the Civic.

Walk Away Door Lock
Included on EX and above trims, the new Walk Away Door Lock feature automatically locks the Civic when the driver leaves the vehicle. This hands-free locking capability adds everyday convenience that’s especially useful when the driver has his or her hands full or is distracted. In typical use, when all doors are closed and the driver walks away, the Civic will automatically lock when the key holder’s distance from the vehicle exceeds 6.5 feet for two seconds or more and when no other key is detected inside the vehicle. An audible buzzer sounds and the hazard lights flash to confirm that the vehicle has locked. The Walk Away Door Lock feature is programmable, and may be turned on or off as the driver prefers. (See the Exterior section for more information.)

Auto-Dimming Rearview Mirror
A Civic first, the EX-L and Touring Sedan models feature an electrochromic interior rearview mirror that automatically dims during nighttime driving to reduce glare from the headlights of following vehicles.

The system consists of two integrated components, an outer shutter mechanism that prevents the intrusion of dirt and dust, and a self-sealing fueling flap that is closed by a torsion spring. Both operate automatically.