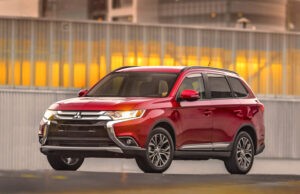 The new 2016 Mitsubishi Outlander was just named “Best Value on Road” at the 12th annual Active Lifestyle Vehicle of the Year awards held in Chandler, Arizona. Attended by nearly 100 members of the Phoenix Automotive Press Association and local athletes, the Outlander rose above other vehicles in its class, proving its significance in the outdoor enthusiast realm.

During the two-day event, journalists and athletes test-drove vehicles on a variety of street, freeway and off-road courses to get a feel for how they perform. Participants scrutinized livability features including seating, cargo capability, and overall versatility for activities such as camping, sports, and road trips.

“It’s exciting to see the 2016 Outlander resonate so well among this group of active people,” said Don Swearingen, executive vice president of Mitsubishi Motors North America. “We’ve positioned this vehicle to be both versatile and a good value, so to see the car recognized as such supports our objective to give consumers what they want in a CUV.”

In its 12th year, The Active Lifestyle Vehicle of the Year program recognizes cars and trucks that best meet the needs of people with active lifestyles, and give automakers a better understanding of what active individuals seek in their cars and trucks. Best value cars are priced under $35,000 and come equipped with features to enhance the outdoor lifestyle such as all-wheel control, antilock brakes, electronic stability control and side airbags.

Available with Mitsubishi’s renowned Super All-Wheel Control (S-AWC) system, the Outlander is capable of being pushed to its limits whether on or off the road.

“With more than 300 new-car models eligible for the 2016 Kelley Blue Book’s KBB.com Best Buy Awards, we are proud to see the Outlander included among the top 49 Finalists as it speaks volumes to where the Outlander stands in the eyes of a vehicle valuation and information source trusted by the industry and consumers alike,” said Don Swearingen, executive vice president of Mitsubishi Motors North America. “We set out to transform the Outlander to be a true contender in the space and this recognition indicates we accomplished that goal.”

Finalists were measured on a set of criteria that identify overall vehicle quality and value, based on Kelley Blue Book metrics and editorial staff expert evaluations. Winners are chosen at the end of a year-long expert evaluation and analysis of a variety of data, including the vehicle’s pricing/transaction pricing, 5-year Cost-to-Own data (including depreciation, insurance, maintenance, financing, fuel, fees and taxes for new cars), consumer reviews, and vehicle sales/retail sales information.

At the end of evaluations, one vehicle will be chosen in each of the 12 categories, with one vehicle being named the overall Best Buy of 2016 Winner. “The Outlander is the beginning of a new direction for the Mitsubishi brand, and with 19 consecutive months of year-over year sales increases, we believe this is just the first step in our resurgence in the U.S. market as we continue to bring quality vehicles consumers want to market” said Swearingen.

Winners of the 2016 Kelley Blue Book’s KBB.com Best Buy Awards will be announced in November.

‘Tis the Season to Help Hungry Pets and Their Owners