He’s one of the few Hollywood leading men that can make you laugh one moment and swoon the next: Meet Ryan Reynolds, star of comedies and action films, husband of screen siren Scarlett Johansson and, now, People magazine’s 2010 Sexiest Man Alive.

Reynolds, who is following in the footsteps of past “Sexiest” honorees and Hollywood heavyweights like George Clooney, Brad Pitt, Sean Connery and Matt Damon, is characteristically self-deprecating about the award. 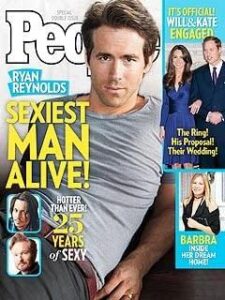 “The most difficult thing is just going to be to really, you know, organically work it into random conversations with strangers,” he joked.

People magazine chose to make the native Canadian its cover stud for its celebrated annual Sexiest Man Alive edition after months of discussion, focus groups and research. Though the 34-year-old began appearing on television in his teens and graduated to movies by the late 1990s, his star really soared last year when he starred opposite Sandra Bullock in the comedy, “The Proposal.”

His six-pack abs, meanwhile, took a star turn five years earlier when he played a ripped vampire hunter in “Blade: Trinity.” Reynolds’ firm physique continues to serve him in superhero films – this summer, he’ll play the title role in “The Green Lantern.”

But Reynolds insists he’s not hard-wired to have a hard body.

“My body in its natural state is virtually a mirror image of Dick Van Dyke,” he said, laughing. “I think some people have this idea that I look like that and work out like that 365 days a year. It’s six months to get yourself there, and then it goes away in about 45 minutes.”

Iza denies she will play Valentina in Darna movie