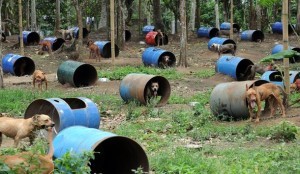 Dogs rescued from a South Korean-run online dog fighting racket are chained to steel barrels used as their temporary shelters as they wait to be handled by volunteers from the Philippine Animal Welfare Society (PAWS) in San Pablo City, Laguna province, south of Manila on April 3, 2012. Philippine police on April 1, 2012 rescued the 300 badly injured pitbulls and arrested seven South Koreans after busting a massive online dog fighting syndicate which was broadcasting the fights online to a betting audience. (MNS photo)

Four Filipino caretakers were also taken in for questioning after the Friday raid at a two-hectare farm in the city of San Pablo just south of the capital Manila, Chief Inspector Renante Galang said.

â€œThe dogs were in very bad shape. They were either sick or were wounded,â€ Galang told AFP.

â€œThis was a major online gambling syndicate in which they cruelly pitted the dogs against each other, sometimes to the death.â€

The dog fights were being broadcast online to a betting audience.

Galang said two of those arrested Friday had also been held in December after police busted a similar operation in a nearby province, when 240 dogs were rescued. The men had been released after posting bail.

Local animal rights group, the Philippine Animal Welfare Society (PAWS), said a check on the animals showed that many were severely injured, with ripped ears and tongues, including 20 that needed to be euthanized.

PAWS program director Anna Cabrera said her group was now coordinating with other agencies to try and rehabilitate the pitbulls, many of which had not been properly fed or sheltered.

She said many more could be put down if no help arrived.

â€œThe government simply does not have a facility big enough to hold these animals,â€ she said, adding that the pitbulls were bred for fighting and could not be placed together in a single cage.

She called on the government to overhaul its animal rights law that allows suspects to post bail of about $100 and go free while their cases moved through the countryâ€™s notoriously slow court system.

A picture released by PAWS on its Facebook page showed one emaciated dog chained to a tree. In the background, steel drums were being used as dog kennels.