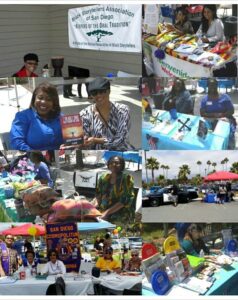 The organization was sponsored by the County of San Diego Board of Supervisor; Supervisor Greg Cox; Supervisor Dave Roberts; San Diego County Library and Friends of Bonita – Sunnyside Library.

The Three Wise Men one of the hottest DJ on Wednesday at the Gaslamp District in Downtown performed.  The DJ’s are Alvin Guarin “Sleepy”; Randy Jingo “J-Mauve”; Mark  Mon “Sikbeatz” and
Jayar Semano “J-Eazy”.

The emcee was Cheryl Daen – White, one of the top 5 finalist for Miss California to Miss America.  She was former Miss San Diego, Miss Orange County, founder of EDUCATE and entrepreneur for Cherie & Co. 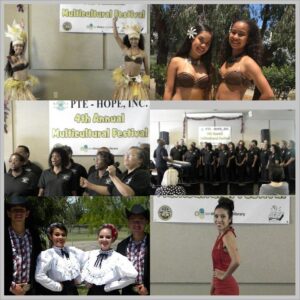 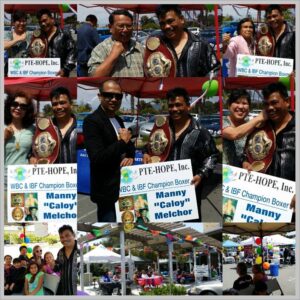 We want to thank the Friends of PTE-HOPE for the generous donations of $1000 or less on behalf of PTE-HOPE, Inc. members:  William “Bill” & Alice Flores; Charito Grace and Max Tan.  The funds was utilized for decorations and light refreshments of turkey and cheese wraps, individually packed chips, individually packed assorted cookies, more bottled water for all attendees.  Friends of PTE-HOPE, Inc. also had in-kind donations of 72 water bottles from Albertson in Lemon Grove and Orange flavored juice mix, courtesy cups and  borrowed jug from McDonald’s Restaurant in Bonita.

Dorothy Kegler, Ph.D. is the author of My Journey: Butterfly Wings, which is based on the steps she took to get an education, and is a featured author in two other books.

Mateo Camarillo, first time Author, created a book, a tell all of his experience, “An Immigrants Journey In Search of the American Dream.”  He hopes to spread the message to Hispanics/Latino’s and all communities.  In a recent interview with the local community Latino newspaper, La Prensa, he said, “I have found the American Dream.  It is not in owning restaurants, radio stations, living in exclusive neighborhoods or teaching at two universities. It comes from the warm feeling all over when you help others.”  10% of Sales Proceed will be donated to PTE-HOPE,  Inc.  Another opportunity to purchase the book for an Author Talk and Book Signing on June 16th, 2015 on Tuesday at 6 p.m. at Bonita-Sunnyside Branch, SD County Library.

Author Tom Hom “RABBIT ON A BUMPY ROAD” is a self-memoir and story of courage and endurance in meeting life’s challenges to achieve The American Dream. Tom was born into a Chinese family in the year of the Rabbit in the 1920’s when much of American society was segregated, socially and economically. He entered school in San Diego, like other children who lived in Chinatown, speaking only Chinese. As he grew older, he faced limited job opportunities and discrimination in housing. He never lost faith in the American dream and went on to achieve success for himself, his family, and the greater good of a diverse America, breaking age-old barriers of prejudice and segregation.

Author Kent Hinckley, “Hearts, Minds, and Coffee” is his first novel. He has written short stories, travel pieces, and a play entitled “The Interrogators” that won an honorable mention in the Writers Digest annual contest. Kent loves non-fiction, history, as well as mysteries, thrillers, and especially espionage novels.  Kent’s many experiences from U.S. Army Military Intelligence in Vietnam, living in Taipei and Tokyo, working for Bank of America in international finance have found their way into his stories. He has worked in the real estate industry emphasizing green technologies. He is born and raised in Palo Alto, California; however put himself through Stanford University via many jobs and a basketball scholarship.  He has  lived in San Diego for over twenty-five years. His artist wife, Sharon, and their adult son, Bill, have added to their many blessings. On top of thay, their two German shepherds make sure he exercises daily.

WBC International Minimum Weight Champion (105 pounds) and IBF Minimum Weight Champion, none other than Manny “Cabalay” Melchor. Melchor was one of the great champions of boxing of Filipino descent. Manny retired from boxing in 2003. Other boxers during his championship reign included all time favorites: “Sugar” Ray Leonard, Muhammad Ali, Joe Frazier and many others making this period in boxing one of the greatest.  Courtesy Collectible Replica of giveaway Photo.

The event had several ongoing activities such as a Kids Interactive Craft Workshop.  The children and adults were able to make paper mache beads that is frequently being made in different countries such as the Philippines, Mexico, Africa, America, etc.  An unlimited photo booth and a Cake Walk for all that had different ethnic music being played from different countries.

PTE-HOPE,  Inc. is a nonprofit organization that is tax deductible and tax exempt.  The mission is about cultural understanding through workshops and festivals.  Through these activities diversity and multicultural is continuing to move forward in San Diego and international communities.

PTE-HOPE, Inc. “Thanks” all the sponsorship, participants, vendors and volunteers from the San Diego County Library, Marisa Lowe, Staff of Bonita-Sunnyside Library who made this cultural event possible.