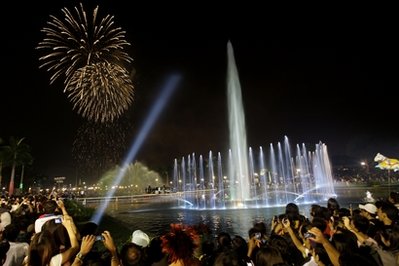 Health authorities blamed the injuries on the proliferation of cheap and low-quality fireworks, bystanders who insisted on watching the fireworks being lighted, and a high percentage of “active users” who were drunk when they lighted the fireworks.
The DOH will continue gathering data from sentinel hospitals nationwide until January 5.
“I donâ€™t want to play with firecrackers anymore,” cried a young boy as he was treated for burns to the eyes at the Jose Reyes Memorial Medical Center in downtown Manila.

Many other victims, mostly children, were awaiting their turn at the emergency and trauma ward, which was on heightened alert in anticipation of New Year-related injuries.
There were also several patients with stab wounds sustained at brawls in New Yearâ€™s Eve parties, the hospital said.

The police said at least eight people were injured by stray bullets in Manila, where the fire department also reported fires at various sites including a university, an apartment building and an abandoned residential area.

There were no reports of casualties from the fires, most of which were caused by fireworks.
“We have not slept since last night. There were eight fires last night alone, and it has now risen to 11 incidents,” Manila fire marshal Senior Superintendent Pablito Cordeta said on local radio. (MNS)

Bello: I might think of running for president if PNoy supports me