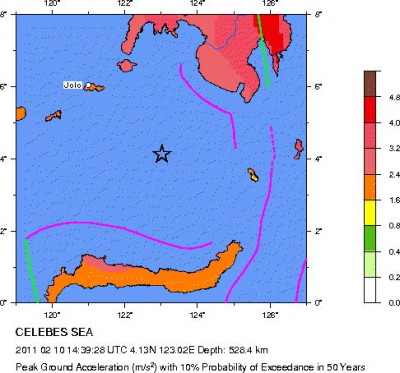 MANILA, February 10, 2011 (AFP) – A 6.5-magnitude earthquake struck under the Celebes Sea off the Philippines on Thursday, the US Geological Survey said.

The US Pacific Tsunami Warning Center, based in Hawaii, did not immediately issue a tsunami warning following the earthquake.

The Philippines are part of the Pacific’s so-called “Ring of Fire”, a zone of frequent tectonic activity where earthquakes and volcanic eruptions are common.

The last major quake to cause widespread death and destruction in the Philippines was in 1990, when a 7.7-magnitude quake killed 2,400 people in the country’s nort