65% of farmers in Yolanda-damaged areas have harvested crops: DA 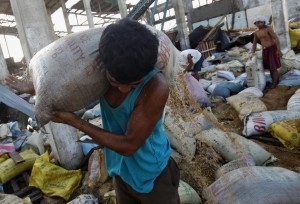 A sack of rice gives way as a man salvages rice at a destroyed warehouse after super typhoon Haiyan battered Tacloban City, in central Philippines on November 15, 2013. The death toll the powerful typhoon were more than 2,000. (MNS photo)

MANILA (Mabuhay) – The Department of Agriculture on Wednesday reported that 65 percent of farmers in areas ravaged by Typhoon Yolanda in November of last year had already harvested their crops even as the agency continues its efforts to help all those affected by the super typhoon.

Agriculture Secretary Proceso Alcala said the crop harvest was due to the joint efforts of the DA and UN’s Food and Agriculture Organization (FAO) to distribute sacks of certified seeds and fertilizer to affected farmers in 44 out of our 81 affected provinces barely a month after the passage of the strongest typhoon in history.

“The DA is proud to announce that farmers from Leyte and Samar have already harvested crops four months after replanting their farms. They have now planted their second crop for the season,” Alcala said.

Additionally, he said the DA had also provided willing farmers with fast-growing crops, among them pechay and mustard, which can be harvested in 20 to 45 days.

The DA also has a midterm program for raising ruminants – either goats or sheep – for every five kilometers of the areas damaged by Yolanda.

Alcala said the department provided planting materials for the grass that the animals will eat.

“Every five kilometers, we will put clusters of either goats or sheep to enhance the source of protein of our countrymen who were affected by typhoon Yolanda,” Alcala said.

However, he said that toppled coconut trees still posed a problem as they may harbor deadly insects.

“The DA continues to help in the clearing operations because rhinoceros beetles might multiply in them and later cause damage to the trees that survived,” he said.

Meanwhile, the DA has been busy in its Bankang Pinoy program.

In June, the DA’s Bureau of Fisheries and Aquatic Resources launched the “unsinkable” Bangkang Pinoy to give fishermen, who risk their lives at sea on a daily basis, guaranteed additional protection especially during inclement weather.

At least 5,000 of these unsinkable, tree-friendly and durable fishing boats are expected to be produced and distributed by the DA before the year ends. (MNS)

Days after twin tragedies, Japan begins to dig for dead

Enrile: You can’t force me to resign