Sure you could tune in to Dr. Phil for some tough love advice about the state of your relationship or have a sit-down for a coffee with your closest girlfriends to vent about your husband’s domestic shortcomings.

But have you ever considered the advice of Adam Smith or perhaps John Maynard Keynes? 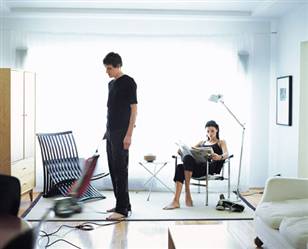 Thereâ€™s a lot you could learn about marital bickering from these two dead economists. So say the authors of the new book “Spousonomics: Using Economics to Master Love, Marriage & Dirty Dishes.” The authors Paula Szuchman and Jenny Anderson, who write for The Wall Street Journal and the New York Times, have applied the market rules of cold, hard capitalism to the economy of your marriage to help you efficiently allocate limited resources such as time, money, sanity and, yes, even your sex drive.

If you aim to split the chores 50/50, that means you’re constantly keeping score.
This is often considered the â€œfairestâ€ way to split the chores, whether itâ€™s washing the dishes, or walking the dog. But aiming for 50/50 means youâ€™re constantly keeping score, making sure that neither of you is getting the short end of the stick, and bickering every time you think you are. Spend too much time fixating on fairness today and you risk not making it to the long-run when things often balance out.

It’s better to use a system similar to what economists call “comparative advantage,” where you each are responsible for what you’re best at, relative to other tasks. You might handle all the bills, grocery shopping, and laundry, while your spouse sweeps and mops, and fixes things when they break. Some weeks, youâ€™ll end up doing more, other times it might be 75/25 in his favor – but you donâ€™t keep track since if your husband handled the grocery shopping, you might land up with a pantry full of Tostitos.

2. Waiting until you’re in the mood to have sex

Unless you’re both extremely hot and share an obsessive addiction to monogamous sex, odds are you’re not in the mood as often as you were when you first met. So if you wait ’til you’re turned on, months might go by before it occurs to you that maybe sex would be a fun thing to do.

The economist George Loewenstein developed a theory called the hot-cold empathy gap, that says we have two selves: a cold, clear-headed rational self that can say, “I will have sex with my husband when I come home tonight because I love him and I will enjoy it and heck, it’s good for my marriage” and a hot, impulsive, emotion-driven, irrational self that says, when the time actually comes, “I’ve had such a bad day, I feel fat and bloated, my husband’s annoying tonightâ€¦.No way am I having sex. Iâ€™m going to watch the Real Housewives, and go to bed.”

When the time actually comes, weâ€™re never in the mood, but we need to listen to our “cool” selves, the voice before we had a bad day. Youâ€™re not in the mood NOW, but you were THEN, when you were thinking about it and knew youâ€™d enjoy it – so just do it. Make sex a requirement, as routine as dinner and tooth brushing. You might not be in the mood, but you wonâ€™t regret it, either.

3. Assuming a rough patch is the end of the world

Relationships go in cycles. There are ups (booms) and downs (busts), just like in the economy. Theyâ€™re not only inevitable, but theyâ€™re actually healthy. They force you to see where youâ€™ve let things slide, taken each other for granted, or just lost sight of what’s important. Embrace the rough patches and borrow a concept from economics called “creative destruction,” or innovating in the face of crisis, and think up a novel solution to an issue that keeps dividing you.

4. Staying up to resolve an argument, even if it takes all night

Bad idea! At a certain point – and weâ€™ve all been there – we just want to be right, whatever it costs. And because someone at our bridal shower advised us to never go to bed angry, we beat up ourselves and our spouses into the wee hours in the name of “resolution.” But the more we try to resolve (aka, win), the later it gets and the more exhausted and resentful we become. So yes, go to bed angry sometimes. Get some rest and sleep on it. Reconvene the anger summit in the morning when youâ€™re both more open-minded and less riled up. This is the economic concept of “loss aversion,” which, in simple terms, means we hate to lose. Recognizing how much we hate to lose, we need to take actions to minimize the damage we do attempting to win at all costs.

5. Trying to mind read – or expecting your partner to do so.

This one should be obvious and yet, again, we all assume our spouse knows we need a hug (or a cocktail) after a bad day at the office or figure that he’ll wash the car on his way past the car wash because it’s so obviously dirty. The Solution: The economic principle of transparency. Give your spouse the information he or she needs, rather than expecting him to know the unknowable. Information is the grease that keeps your little economy functioning.

Send your spouse a text promising a back rub and you’ll be less likely to flake on doing it.
We think weâ€™ll give him that well-deserved back rub, or take the kids for an afternoon so she can get out the door for a child-free afternoon, but then we flake. The time never seems right. The to-do list remains too long. We think weâ€™re great spouses but sometimes weâ€™re just not. The best solution to our procrastination is to devise something economists call “commitment devices” – ways to force ourselves to commit to things. Send your husband a text promising a back rub and you sort of have to do it. Arrange a personal training session for your wife and the kids are all yours for the afternoon.

7. Underestimating the power of small changes

When thinking about trade offs: Should I sleep or have sex? Long commute and big house or shoebox in the city and more time with the kids? When you start to think about one person quitting their job because the demands of housework and childcare are too overwhelming with both partners working, consider the smaller changes that might help first. What if you cooked more meals on the weekend? Or hired an occasional cleaning service so neither of you have to spend your free time scrubbing the sink?Â  Instead of grand solutions, look for the incremental changes that can improve situations.

US WORKS WITH PH TO IMPROVE MARITIME AWARENESS, SECURITY