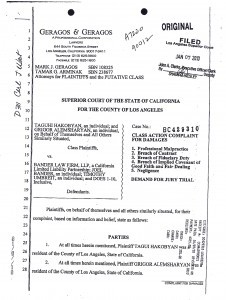 The class action lawsuit filed by celebrity Atty. Mark Geragos on behalf of homeowners against Joel Bander and his firm.

Itâ€™s been two weeks and we have yet to hear from the pseudo investigative reporters of their claim that there exists a Peopleâ€™s Tonight story â€“ Manilaâ€™s most popular afternoon tabloid â€“ that the paper said they retracted their own story when they published an article that Atty. Joel Bander was criminally charged with â€œacts of lasciviousnessâ€ for allegedly molesting a Filipina.

While they try to deal with this problem, this author would like to clarify to Balita readers that the letter of inquiry submitted to the Philippine Bureau of Immigration as presented by the pseudo investigative reporters in their own newspaper was a mere request to find out why a foreigner who has a standing warrant of arrest can go in and out of the country.

In our past two issues, we presented real documents from a Manila court identifying Joel Bander as being accused in 2006 (Weekend Balita Oct. 15) and a warrant of arrest that was issued against him two years later, in 2008 (Weekend Balita Oct. 22). Again, we reiterate that Balita was forced to published the documents, one of which described the graphic sexual attack allegedly perpetrated by Bander against the victim, to dispute the claims of the fake investigative reporters that the victim was fictitious and that the events were â€œuntrue and without basis.â€

But what’s truly amazing is the fact that despite the criminal case in the Philippines, these pseudo investigative reporters, who are Filipinos by the way, have chosen to defend an indefensible American lawyer, who was also accused by more than 800 American homeowners of committing what could be one of the biggest loan litigation scams in the U.S. Most of these homeowners are â€“ listen up fake investigative reporters! â€“ Filipinos, your own kababayans, here in Southern California.

For a clearer picture, these 800 homeowners were former clients of Bander himself. They were those who had signed up with the Bander Law Firm (BLF), which had advertised (in full pages in a broadsheet newspaper that he used to also represent as its legal counsel) that they(BLF) would sue their lenders and save their homes from foreclosure.

Among those who filed a complaint against Bander wereÂ  Antonio â€œAnjoâ€ Sanchez of Coachella Valley, Grace Laurel of Victorville, Lisa Resuta, Joseph Parcacio, Daniel De Leon and Bach Quiaonza of Long Beach. There were also Korean victims, such as Carol In, Ji Chang, Ted Yoon and Chul Soo Kim. Ted Yoon claimed he paid the Bander Law Firm $26,000 for multiple properties, but was never given the legal service he was promised.

If that’s not enough, Atty. John B. Miller Jr. alone filed on September 9, 2009, a complaint to the California State Bar against Bander on behalf of 29 homeowners. This complaint at the State Bar prompted Bander to sue Miller for allegedly â€œsoliciting his clientsâ€ but was dismissed by the court. Miller had told Balita that each had paid the Bander Law Firm (BLF) at least $8,000.

Ted Yoon and several others later sued the BLF for fraud and for violations of the RICO Act or the Racketeer Influenced and Corrupt Organizations Act, which is a federal crime. For the benefit of the pseudo investigative reporters, Yoon was represented by Atty. Anne Singer, in case they choose to “investigate” this matter.

Another case â€“ this time for breach of contract, fraud and deceit, negligence, etc. â€“ were filed by another lawyer against Bander and his law firm by Shin K. Yoon, aka Lisa Yoon, and represented by Atty. Robert Mills.

Yet another case was filed against Bander and the BLF filed by, are you ready for this?, Atty. Mark Geragos on behalf of Taguhi Hakobyan and Grigor Alemsharyan (two Armenian nationals) and â€œAll Others Similarly Situatedâ€ homeowners â€“ a class action lawsuit. Yes, he is the same Atty. Mark Geragos, the celebrity lawyer who once represented Michael Jackson and Winona Ryder â€“ the same criminal lawyer you always see on CNN.

All these cases filed against Banderâ€™s law firm may no longer proceed because the 25-year-old firm filed for bankruptcy in early 2010. Sadly, the homeowner victims may not get a single cent from the thousands of dollars they paid to the firm.

If these lawsuit donâ€™t convince you, dear readers, that thereâ€™s something wrong with Joel Bander, it is our hope that the criminal case filed against him in the Philippines for allegedly molesting an innocent Filipino woman, who was seeking his help to get a U.S. visa, hopefully will.

Even if Bander says that the case was dismissed, it wasnâ€™t because she was â€œfictitiousâ€ as he claimed she was, it was because she didnâ€™t appear in court, which was understandable given the fact that the humiliation she will have to face and against one of Philippinesâ€™ most popular and most expensive lawyers may be too much to bear.

Who paid for Bander’s expensive lawyer in the Philippines? Your guess is as good as ours, although the other lawyers claimed that Bander might have earned millions of dollars from the homeowners they said he â€œduped.â€ Try this: 800 homeowners multiply by $8,000. Answer: $6.4 million. And yet the BLF said it was bankrupt.

(Next week: Former Bander lawyer, who was part of the firm when 800 homeowners became victims, testifies why the Bander Law Firm was forced to shut down.)

Escudero: Red tape should have no place in gov’t