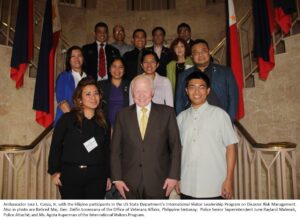 The participants, coming from the Armed Forces of the Philippines, the Department of National Defense, the Philippine National Police, the Department of Foreign Affairs, and the city governments of Pasay, Pasig and Tacloban, are meeting with US government and non-government officials to exchange views and knowledge on DRM. The program, which commenced on 30 August and will conclude on 19 September, takes the Filipino officials to interactive sessions with their American counterparts in the capital and five (5) other US cities.

Leading the group is Philippine Navy Captain Roy Vincent Trinidad, recipient of the 2015 Aquino Fellowship Award for Public Service. Currently serving as Chief of Staff of Naval Forces Western Mindanao in Zamboanga City, Captain Trinidad is widely recognized for his effective leadership as commander in charge of coordinating the civil-military relief operations in Tacloban Airport following the November 2013 onslaught of Typhoon Haiyan.

Also part of the group is Pasay City Administrator Dennis Bernard Acorda. Atty. Acorda earned praises for the timely establishment of a ‘Tent City’ in Manila for Filipinos from Samar and Leyte displaced by Typhoon Haiyan. The operation involved the effective mobilization of both public and private resources to meet the needs of more than 500 displaced persons.

The program underway is the inaugural IVLP for DRM and is welcomed by the Philippines for its importance and timely introduction in this age of climate change. The new IVLP theme is expected to enhance the partnership between Manila and Washington on an emerging area of concern that poses a new set of challenges for climate vulnerable communities.

“This program is tangible proof of the growing cooperation between the Philippines and the United States on the very critical issue of disaster risk management. I am confident that our two countries have much to share with each other, with the end view towards safeguarding lives in the event of natural calamities,” Ambassador Jose L. Cuisia, Jr. said in a meeting with the group on 03 September.

Now on its 75th year, the IVLP is a US State Department program launched in 1940 to promote mutual understanding between the United States and other countries. Filipino participants to the IVLP are selected by the United States Embassy officials in Manila and can come from government and non-government sectors. IVLP alumni include many senior leaders who have served or are continuing to serve the Philippines in different capacities.