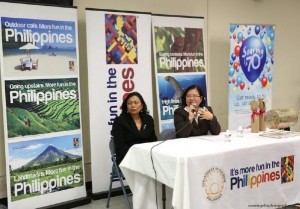 Los Angeles  – The Philippine Consulate General and the Department of Tourism in Los Angeles launched on 13 February 2014, the 9th Ambassadors, Consuls General, and Tourism Directors Tour (ACGTDT) to the Philippines scheduled on 28 July to 02 August 2014.

About 60 tour representatives and friends from the media attended the official launch at the Rizal Hall of the Consulate.

The ACGTDT is organized to enable Filipinos based in North America to revisit their homeland and experience the beauty of the country’s top tourist destinations, take a vacation with family and friends, and explore business opportunities.