A challenging role for Kris Bernal 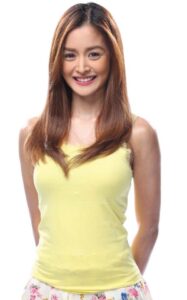 Kris Bernal finds her role in “Little Nanay” very challenging, and even thought she had lost it when she was made to do several screen tests.

This is why she got so emotional and nervous during the press launch of the newest Kapuso teleserye.

Tinay, granddaughter of Lolay Annie Batongbuhay (Nora Aunor) and Loloy Berting Batongbuhay (Bembol Roco), is a 25-year-old woman with the mental acumen of a nine-year-old. In the story, she has a six-year-old daughter Chiechie (Chlaui Malayao) who acts as the “Little Nanay” to Tinay.

To prepare for the role, Kris said she researched on mental disability and watched movies like “I Am Sam” and “The Other Sister.” She also watched videos on YouTube that show persons with similar condition. “We had immersion session din,” she added.

Why Iñigo Pascual prefers to stay single at the moment