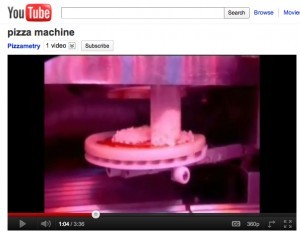 Like the 24-hour baguette baking vending machine from France, a team of New York entrepreneurs has created an automated pizzeria that delivers freshly baked, hot pizzas with the touch of a few buttons.

Customers choose between white, cheese and pepperoni pizza, and a window allows them to watch as their order is made.
First, the machine presses a ball of fresh dough into an eight-inch round pie. Then a nozzle pipes out pizza sauce. A spinning platform allows the sauce and cheese â€“ which is also distributed via dispenser â€“ to be evenly distributed.
The pizza takes about 90 seconds to bake, during which time customers are distracted by a 32-inch flat screen TV that blares entertainment and ads. When the pizza is finished, itâ€™s delivered in a vented box along with a disposable pizza cutter, napkin and two spices.
The backstory to the invention reads like an archetypal all-American story. Created and developed by an immigrant from the Middle East who arrived in the US virtually penniless, Puzant Khatchadourian went on to become a successful jeweler who cast jewelry for retailers like Movado, Harry Winston and Tiffanyâ€™s. Company president John Kavazanjian is a retired CEO of a multinational.

Meanwhile, the stainless steel machine seen in the video is a prototype, and the company says theyâ€™re in the process of building five machines for market testing. It can hold enough ingredients for 150 pizzas and the whole process â€“ between placing an order and retrieving the pizza â€“ takes 3.5 minutes.
Entrepreneurs are constantly coming up with new ways to automate purchases with vending machines. In France, one baker who was fed up with customers knocking on his door after hours asking for baguettes, invented a 24-hour baguette machine that spits out a freshly baked loaf in minutes.
Japan, however, has the highest number of vending machines per capita and stocks a wide â€“ and sometimes unexpectedâ€”variety of items like liquor, fried foods, umbrellas, flight insurance, used schoolgirl underwear, porn magazines, Hello Kitty popcorn, live rhinoceros beetle pets, and live lobster. 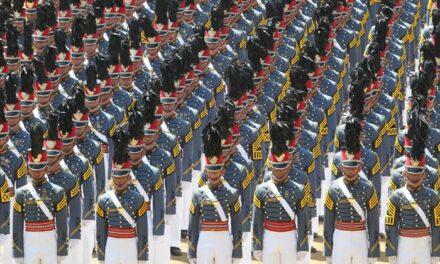 DOH RESUMES USE OF ASTRAZENECA VACCINES FOR ALL AGE GROUPS