WASHINGTON, D.C. – AARP is proud to be a new Spotlight Sponsor of the 15th San Diego Asian Film Festival from Thursday, November 6 through Saturday, November 15.

“AARP recognizes the impact that stories and storytellers have in our communities and support events like the San Diego Asian Film Festival that inform, inspire, and entertain moviegoers age 50+ and their families,” said Daphne Kwok, AARP Vice President of Multicultural Markets and Engagement, Asian American and Pacific Islander Audience. “As the film festival prepares to celebrate its 15th anniversary, we applaud Pacific Arts Movement on reaching such a significant milestone.”

“We are delighted to partner for the first time with an organization like AARP that is committed to the Asian American community,” said Pacific Arts Movement Executive Director Lee Ann Kim. “Thanks to their generous support, we’ll keep growing San Diego’s largest showcase of Asian American and international cinema.” 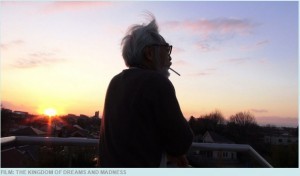 • MY LIFE IN CHINA (China & U.S., 2013, World Premiere on Nov 9, 12) directed by Kenneth Eng is a documentary about a man retracing his steps back to China after being disillusioned by the American Dream.

• THE KINGDOM OF DREAMS AND MADNESS (Japan, 2013, West Coast premiere on Nov 8, 11) directed by Mami Sunada is a documentary following beloved animation director, Hayao Miyazaki as he completes his final Studio Ghibli film.

AARP is a nonprofit, nonpartisan organization, with a membership of nearly 38 million, that helps people turn their goals and dreams into real possibilities, strengthens communities and fights for the issues that matter most to families such as healthcare, employment and income security, retirement planning, affordable utilities and protection from financial abuse. We advocate for individuals in the marketplace by selecting products and services of high quality and value to carry the AARP name as well as help our members obtain discounts on a wide range of products, travel, and services.  A trusted source for lifestyle tips, news and educational information, AARP produces AARP The Magazine, the world’s largest circulation magazine; AARP Bulletin; www.aarp.org; AARP TV & Radio; AARP Books; and AARP en Español, a Spanish-language website addressing the interests and needs of Hispanics. AARP does not endorse candidates for public office or make contributions to political campaigns or candidates.  The AARP Foundation is an affiliated charity that provides security, protection, and empowerment to older persons in need with support from thousands of volunteers, donors, and sponsors. AARP has staffed offices in all 50 states, the District of Columbia, Puerto Rico, and the U.S. Virgin Islands. Learn more at www.aarp.org.