Two of the most active business and professional organizations in Orange County share between them a record of more than 40 years of serving the community. Drawing membership notably from diversified multi-ethnic backgrounds, a common denominator marks both associations – i.e. to serve and provide the appropriate friendly atmosphere in the business community where many of them thrive.

Both the Asian Business Association of Orange County (ABAOC) and the Filipino American Chamber of Commerce of Orange County(FACCOC) enjoy the patronage and support of business entrepreneurs, professionals and the business community to achieve their objectives. 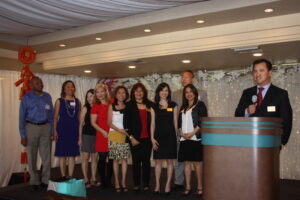 ABAOC Lunar New Year: The members and guests of the Asian Business Association of Orange County joined the celebration of the Lunar New Year the Seafood World in Westminster last Feb. 12 which was an occasion not only to enjoy the sumptuous meals but to network and exchange pleasantries. Pres. Tom Nguyen is shown introducing the members of the Board of Directors of ABAOC at the event.

The month of February has been a busy one for both organizations which also draws membership support from each other.

For the more diversified ABAOC, in February this year marks the celebration of one of the most significant day of the year with the observance of the Lunar New Year.

The dates of the holiday vary from year to year, beginning sometime between January 21 and February 20 according to Western calendars. Days before the beginning of the new lunar year, houses are thoroughly cleaned to remove any bad luck that might be lingering inside, a custom called “sweeping of the grounds”.

ABAOC celebrated the Lunar New Year a week in advance at Seafood World in Westminster where the reception also doubled up as a networking event for the nonprofit organization which “represents over 100,000 Asian businesses in Orange County.” 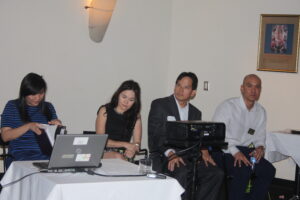 Meanwhile, the Filipino American Chamber of Commerce of Orange County (FACCOC) had a more serious business atmosphere in Santa Ana with its 2015 Small Business Summit where a panel of experts dished out information on conducting business operations in Orange County.  Four speakers took turns in sharing valuable pieces of advice and information on subject matters that include Healthcare Updates, I-9 Form, Tax Secrets and Social Media Habits by Suzanna Choi, Atty. Gladys Gervacio, CPANoel Dalmacio and Realtor Edwin Baloloy, respectively.

“Love for Tacloban Fundraiser” in Whittier

FACCOC President Elena Lapid-Salonga, took the occasion to seek the participants’ support for the upcoming fund-raising event of the Chamber in support of the rehabilitation efforts being done to the victims of Typhoon Yolanda in Tacloban.

Dubbed “Love for Tacloban Fundraiser, the event will have as speakers Tacloban City Mayor Alfred Romualdez and his wife, Councilor Cristina Gonzalez-Romualdez, a former movie star. The event is scheduled on March 14 at the Radisson Hotel in Uptown Whittier.