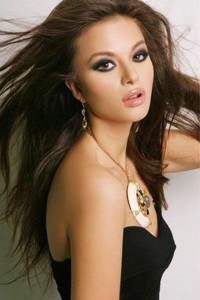 MANILA  (Mabuhay) — One of the television hosts for a popular noontime show easily beat out 25 other candidates for the title of Miss World 2014 Philippines, during grand coronation night held at the SM Mall of Asia Area in Pasay City.

In one of the most anticipated beauty pageants this year, half German-half Filipina Valerie Weigmann won the title after she impressed the judges in the final question-and-answer portion of the contest.

She was crowned by reigning Miss World Megan Lynne Young, the country’s first Miss World title holder from the Philippines. The 25-year-old model is one of the hosts for the top-rating noontime show “Eat Bulaga” in the “Juan For All, All For Juan” segment; and co-owns the first German-Turkish restaurant called bamm in Makati City.

Weigmann,also an actress, received 12 special awards, including Best in Swimsuit, Best in Evening Gown, Best in Fashion Runway, among others. The 5’9 beauty will represent the Philippines in the annual Miss World contest in London sometime in December. She has a non-showbiz boyfriend.

They won cash prices and products from this year’s pageant sponsors. The colorful pageant was also participated in by officers and men of the Philippine Army and Armed Forces Chief of Staff Gregorio P. Catapang. (MNS)