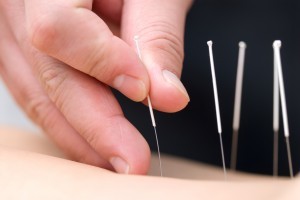 Acupuncture has been shown to reduce inflammation provoked by sepsis.©Bork/shutterstock.com

(Relaxnews) – New research published in the journal Nature Medicine details a direct connection between acupuncture and the treatment of sepsis, a condition stemming from exposure to infection in hospital intensive care units.

Acupuncture, an ancient Chinese remedy, has been used in a variety of contexts, including as a chronic pain treatment, a weight-loss aid and a complement to in-vitro fertilization. For this study, doctors turned their attention to sepsis, a major cause of hospital deaths.

One of the body’s major nerves, the vagus nerve, is responsible for reducing inflammation in the body when stimulated. Researchers wanted to find out whether electroacupuncture could help reduce inflammation and organ injury in septic mice.
Electroacupuncture is a form of the ancient Chinese remedy that enhances the effect of needle treatment via small electric currents. This treatment is already FDA-approved for human patient use.

In the study, molecules known as cytokines limited inflammation in septic mice who were stimulated with electroacupucture, as the researchers predicted. Half of the mice who received the treatment survived for at least one week, while those who did not receive the treatment died.

Furthering their research, Ulloa and his team found the treatment ceased to work when adrenal glands were removed, prompting them to seek an alternative treatment that would work for patients with low-functioning adrenal glands. The team ultimately found that fenoldopam, a drug that mimics the effects of dopamine, resulted in reducing sepsis-related deaths by 40 percent. This was the case even when electroacupuncture was not used.

“I don’t even know whether in the future the best solution for sepsis will be electroacupuncture or some medicine that will mimic electroacupuncture,” said Ulloa. The immunologist remains hopeful that both electroacupuncture and fenoldopam/similar drugs have potential to treat sepsis among other inflammatory diseases, including rheumatoid arthritis, osteoarthritis and Crohn’s disease.

GCQ IN NCR PLUS EXTENDED UNTIL JULY 15