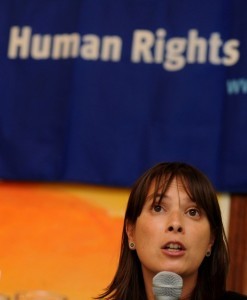 While Aquinoâ€™s administration appears more willing to tackle the problem than previous governments, soldiers are still getting away with the unlawful targeting of mainly leftist activists, the New York-based monitor said.

â€œThere is a continued pattern of extra-judicial killings of leftist activists,â€ HRWâ€™s deputy Asia director Elaine Pearson said in Manila as she released a 98-page report on alleged rights abuses by the Philippine military.

â€œDespite several strong statements… what weâ€™ve seen is that in many ways, the pattern remains the same.â€

In the report, HRW documented what it said was â€œstrong evidenceâ€ of the military being involved in the killings of seven activists and the disappearances of three others during Aquinoâ€™s term that began a year ago.

Many soldiers make no distinction between leftist groups, who wage peaceful protests, and communist insurgents who have been pursuing a guerrilla war to seize power for more than four decades, according to the report.

Pearson said, just as with previous governments, Aquinoâ€™s administration had been unable or unwilling to punish accused soldiers.

â€œActivists are being gunned down in the streets, while implicated soldiers walk free,â€ she said.

â€œThe Philippines can only bring an end to these horrific abuses if it is clear that anyone who orders or commits them will be jailed and their careers over.â€

This was in contrast with previous president Gloria Arroyoâ€™s administration, which dismissed human rights complaints as being communist propaganda, according to Evans.

But Evans said the government must take the next step of investigating and prosecuting implicated soldiers.

The head of the militaryâ€™s human rights office, Colonel Domingo Tutaan, told AFP the armed forces was willing to work with HRW to look into the alleged abuses documented in the report.

He said that if a soldier was found to have violated human rights, he would be â€œdealt with to the full extent of the lawâ€.

Aquinoâ€™s spokesman, Edwin Lacierda, said he disagreed with HRWâ€™s accusation that the government was not fully committed to stamping out the problem and insisted it was liaising closely with the military.

â€œWe will not tolerate extra-judicial killings in this country,â€ he said. â–