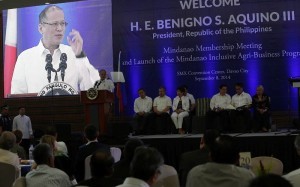 MANILA (Mabuhay) – To ensure lasting peace, the Armed Forces of the Philippines (AFP) on Wednesday expressed its full support for the quick passage of the proposed Bangsamoro Basic Law (BBL) that seeks to provide a political solution to the decades-old conflict in Mindanao.

President Benigno S. Aquino III turned over on Wednesday morning the final draft of the proposed BBL to Congress leaders in a ceremony in Malacañang.

The BBL is part of the Comprehensive Agreement on the Bangsamoro (CAB) signed with the Moro Islamic Liberation Front in March this year.

“Underlying CAB is the recognition of the justness and legitimacy of the cause of the Bangsamoro people and their aspiration to chart their political future through a democratic process,” it stressed.

“The AFP welcomes the announcement of the President that the BBL will be submitted to Congress this week. We believe that the successful implementation of the peace process with the eventual establishment of the Bangsamoro will provide the political solution that will end the four-decade conflict in Mindanao,” AFP chief-of-staff Gen. Gregorio Pio Catapang said.

He said that the Armed Forces has always supported the Mindanao peace process knowing that the problem cannot be solved through a military solution alone.

“By enacting the proposed Bangsamoro Basic Law, a just and lasting peace will finally dawn in Mindanao ending more than 40 years of fighting between Filipinos versus Filipinos. With this political solution, the sacrifices of more than 150,000 Filipinos who perished in this strife would not be in vain,” the AFP chief also said.

Throughout the GPH-MILF peace talks, the AFP has expressed its support for the process as it has said that “the same suffering, misery, and misfortune that our people feel every time armed conflicts arise,” because soldiers suffer, too, as they “continue to risk their lives as first responders to armed conflicts and violence.”

The military had also expressed its optimism since the beginning of the peace talks saying that the milestones achieved had put into concrete example the principles embodied in its Internal Peace Security Program “Bayanihan” that concerted efforts and cooperation among stakeholders is key to achieve the common goal of just and lasting peace not only for Mindanao but for the entire country. (MNS)