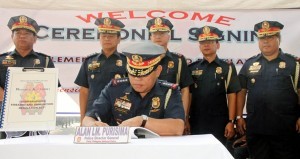 Philippine National Police Director General Alan Purisima signs the Implementing Rules and Regulation (IRR) of Republic Act No. 10591 or the Comprehensive Law on Firearms and Ammunition during the flag-raising ceremony on Monday (Nov. 25, 2013) at the PNP Headquarters in Camp Crame, Quezon City. Purisima said the IRR of the new gun law will enable the PNP to curb down gun-related crimes and establish effective firearms control in the land. (MNS photo)

MANILA  (Mabuhay) – Showing that there are still a lot of patriotic Filipinos left yet, the Armed Forces of the Philippines (AFP) inducted into service 140 2nd lieutenants on Monday.

He was assisted by the AFP chief-of-staff, Gen. Emmanuel T. Bautista, and Secretary of National Defense, Voltaire T. Gazmin in the distribution of diplomas and presentation of awards.

After the graduation ceremony, the 55 graduates from the Army, 40 from the Navy and 45 from the Air Force took their oath as regular military officers before Bautista.

“The AFP that you are joining today is in the midst of a transformation. Now, you all have the responsibility of shaping and leading this transformation, in the spirit of the vision and renewed call to reform inspired by our President,” the AFP chief said.

“Take pride in the uniform that you wear, and in the patriotic duty that you will perform as protector of the people and of the State, in the attainment of our vision of being a world-class armed forces, source of national pride; and in our commitment to winning just and lasting peace for our nation,” he added.

The officer candidate schools established in the three Major Services train civilians and enlisted personnel who are baccalaureate degree holders to be future members of the AFP regular force.

The one-year course prepares an officer candidate with a rank of Probationary Second Lieutenant and Probationary Ensign to be mentally, physically and emotionally fit to earn a commission as an officer in the Army, Air Force, and Navy. (MNS) 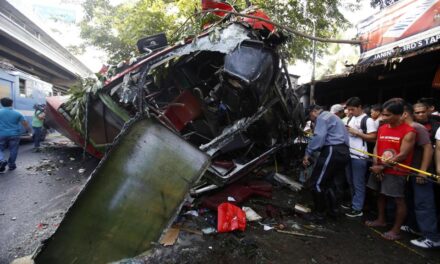