AFP on standby for manhunt vs Palparan 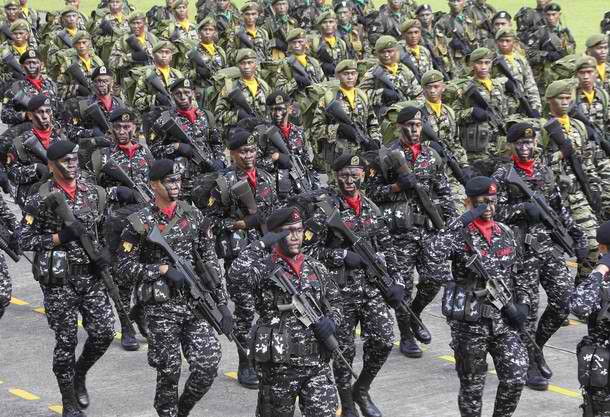 Members of the Special Forces march during the 76th Armed Forces of the Philippines (AFP) anniversary inside the military headquarters of Camp Aguinaldo in Quezon city, metro Manila December 21, 2011. (MNS photo)

MANILA, Dec 22 (Mabuhay) — The Armed Forces of the Philippines (AFP) will not join in the manhunt for retired Major General Jovito Palparan, for now.

AFP spokesman Col. Arnulfo Marcelo Burgos told reporters that the military will only come in upon the request from the court or other law enforcement agencies.

“However, if requested by the Philippine National Police, just like in law enforcement we’re doing, we are always ready to assist and extend necessary assistance and if ordered by court and higher civilian authorities, we will extend assistance,” he added.

The Intelligence Service of the AFP (ISAFP) will also help if there is a request.

ISAFP chief Brig. Gen. Ceasar Ronnie Ordoyo said: â€œIf we will be requested, then properly we will prepare one (manhunt operation). As of now, there is still no request but we will assist of course, as agents, as part of agency of government, if we are requested (to help in manhunt).â€

However, another military official said the AFP has already sent â€œalert bulletinsâ€ to forces on the ground to prevent Palparan from leaving the country.

“Basically, the alert bulletin is similar to a watch list to prevent personalities from using the backdoor and leave the country,” the source said on condition of anonymity.

“The alert bulletin is like a watch list to prevent him from using exits or backdoor where there are no presence of law enforcers, except the AFP,” the source said.

The Malolos court issued an arrest warrant on Tuesday against Palparan, who is an accused in the abduction of two University of the Philippines students back in 2006. (MNS)