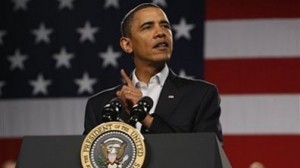 WASHINGTON, August 22, 2011 (AFP) – African American support for Barack Obama is softening amid a sense that the president has ignored the economic travails faced by this once rock-solid pillar of his political base.

A Gallup poll last week found Obama’s poll numbers in the African American community down from its once stratospheric 95 percent approval early in his term, to a still-high, but notably lower 81 percent — tying his worst ever showing from earlier this year.

Realclearpolitics.com, which compiles an average of major polls, put the president’s approval rating among all Americans at 43.5 percent.

Observers say weaker support for Obama owes to a faltering economy that at 16 percent unemployment for blacks — nearly double the national average of nine percent — has hit the African American community especially hard.

The Maryland lawmaker said his constituents in the predominantly black city of Baltimore, about 40 miles (about 65 kilometers) from the White House, want to see the Barack Obama of the 2008 presidential campaign, who championed progressive causes to aid the poor and downtrodden.

“He has got to go back to those basic points. That’s what got him elected,” the lawmaker said.

“People need to know that the president feels their pain and is trying to create jobs. Jobs has got to be… number one.”

Black frustration with Obama may have hit new highs partly as a result of last month’s debt ceiling debate, during which many critics said Obama made too many concessions to Republicans and their Tea Party faction.

Democratic CBC chairman Emanuel Cleaver, for one, scathingly denounced the deal concluded by Obama as a “sugar-coated Satan sandwich.”

And many blacks, who vote overwhelmingly Democratic, said they want to see more pushback from the president in future battles with the conservative Tea Party movement.

“Almost every African American I have talked to said they want him to fight, and fight harder,” Cummings said.

Even as Obama prepares to unveil a major jobs package next month, black leaders said the president has not been sufficiently proactive on the unemployment crisis.

The CBC launched a five-city tour this summer to reach out to the black community over its worries about joblessness and economic blight, and Cummings expressed frustration that Obama’s own jobs tour last week focused on three mostly white states in the US heartland.

One prominent member of the black lawmakers’ group, California Representative Maxine Waters told a CBC jobs forum last week that African American leaders have so far refrained from publicly taking the president to task, but said that could soon change.

“We want to give the president every opportunity to show what he can do and what he’s prepared to lead on,” she said at a town hall meeting in economically depressed Detroit.

Meanwhile, two other prominent black figures, talk show host Tavis Smiley and Princeton University professor Cornel West, have launched a 15-city “Poverty Tour” intended to highlight what they see as Obama’s failings in dealing with the need of the poor and minorities.

Despite the criticism, Cummings said there remains overall a deep reservoir of good will toward Obama among African Americans, who are “very protective of our president” — the first person of African descent to hold the office.

“They see him as their son, as their brother, and they see us and they are very proud of him,” he said.

David Bositis, a respected analyst of African American issues based in Washington, told The Tennessean newspaper that Obama’s trough with black constituents was sure to reverse itself before the November 2012 election.

“President Obama is at a tough point right now, but African Americans know there’s only one person trying to help African Americans and the rest of the country get out of this mess we’re in. And it’s certainly not the Republicans,” Bositis said.

Net satisfaction with Aquino plunges to its lowest – SWS