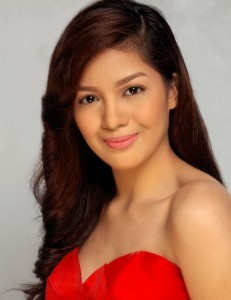 After a long wait, Jane Oineza finally bagged her first lead role in a TV series, the 18-year-old actress confirmed on Wednesday.

Oineza said she underwent a look test for the upcoming ABS-CBN teleserye.

The announcement of Oineza’s first starring role came after she finished 3rd place in the reality TV series “Pinoy Big Brother,” where she opened up on her frustrations about her career.

Oineza started acting at age 4 and went on to join the cast of “Goin’ Bulilit” in 2005. Among her co-stars in the kiddie gag show were Kathryn Bernardo and Julia Montes, who both have since top-billed several TV series and movies.

By her own admission, Oineza had been “patiently waiting” for her big break, as several of her batch mates in “Goin’ Bulilit” landed land plum roles in high-profile projects.

“Sobrang blessing din po na right after ‘PBB,’ biglang may ganitong nangyayari,” Oineza said when asked how she feels about finally getting her own teleserye.

Oineza, however, said she cannot reveal more details about the series. (MNS)

‘Manny’ in US theaters and On Demand Jan 23