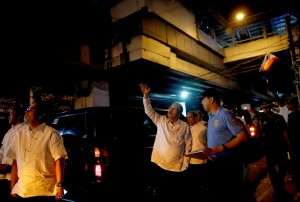 President Benigno S. Aquino III inspects the security preparations at Villamor Air Base, the Apostolic Nunciature and the Light Rail Transit (LRT) 1 Quirino Station during the dry run on Tuesday night (January 13) of the Papal convoy for the pastoral visit of Pope Francis to the Philippines. With the President is Interior and Local Government Secretary Manuel Roxas II. (Photo by Gil Nartea / Malacañang Photo Bureau)

MANILA, Jan 14 (Mabuhay) – The World Bank further cut its growth projection in 2014 for the Philippine economy that it said was weighed down by the slow government spending,the Washington-based multilateral lender said on Wednesday.

But the local economy is expected to rebound in the next two years, thanks to the realization that government has to spend more for infrastructure, the WB added.

In its latest Global Economic Prospects released Wednesday, the agency said the Philippine economy likely grew by six percent last year, less than one percent lower than the earlier forecast of 6.4 percent.

“However, growth is expected to rebound this year and also in 2016… primarily hinged on the ability of the government to fully implement the budget and the Yolanda master plan,” he told reporters in a briefing in Taguig.

Other factors that will drive growth include the positive outlook of consumers and businesses, stronger foreign direct investments and falling oil prices, Van den Brink said.

“Much lower oil prices can boost manufacturing and consumption. In fact, the Philippines is one of the biggest beneficiaries of falling oil prices in the world,” he added.

On Tuesday, crude oil prices hit their lowest in almost six years to $45 per barrel as United Arab Emirates, a big  Organization of the Petroleum Exporting Countries (OPEC) producer, stood by the group’s decision not to cut output to tackle a supply glut, Reuters reported. (MNS)