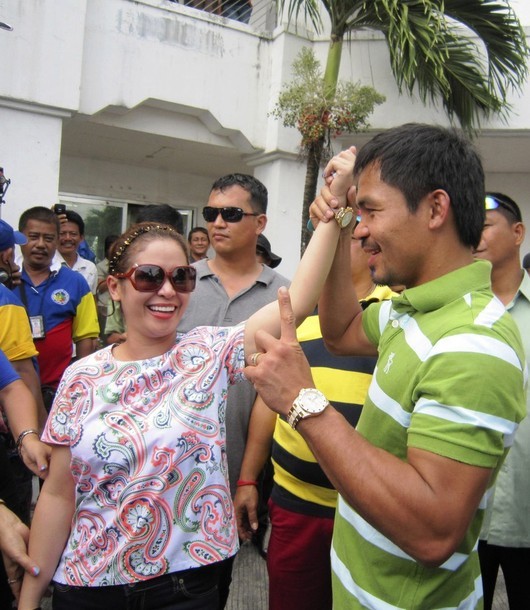 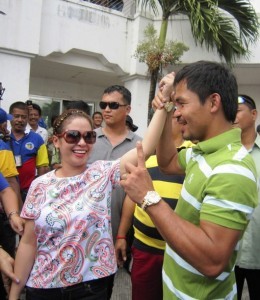 Filipino boxer and incumbent Congressman Manny Pacquiao, right, raises the hand of his wife Jinkee shortly after filing their respective Certificates of Candidacy (COC) for next year’s midterm elections at the local Commission on Elections office in Alabel township, Sarangani province in southern Philippines Tuesday Oct. 2, 2012. Pacquiao is seeking reelection for his province’s lone congressional district while his wife is running for vice-governor of the province. Pacquiao’s younger brother and a sister-in-law have also entered politics and are running as Congressman in another province and as a village chief respectively. (MNS photo)

MANILA (Mabuhay) – Manny Pacquiao’s wife, Jinkee, said now is the time for the boxing champ to hang his gloves and retire, having proven himself to the whole world.

She said Pacquiao has proven a lot after this second match, which was meant to snatch back the WBO welterweight belt from American Timothy Bradley.

Reporters immediately flocked to the teary-eyed Jinkee after it was declared via unanimous decision that her husband won.

All throughout the 12 rounds, Jinkee was seen cradling her womb. She is expected to give birth within the month.

Phelps back in China as doping dominates