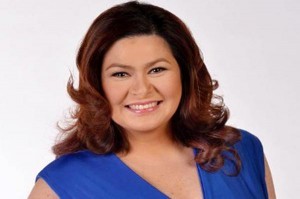 Aiko Melendez said she has not only forgiven her former boyfriend Patrick Meneses and actress Ara Mina, but now even prays for them.

Melendez credited her complete “healing” for being able to pray for the well-being of Ara Mina and Meneses.

“I’ve actually not just forgiven them, but I pray for them, mahirap man isipin… Dapat pag healed ka na, ‘di ba, mapagdadasal mo na ‘yung tao, so that’s what I do now. I pray for them,” she said.

Mina also happens to be a former girlfriend of Melendez’s ex-husband Jomari Yllana. Mina and Meneses, the incumbent mayor of Bulacan, Bulacan, are reportedly expecting their first child.

Asked if she is looking forward to have good ties with Meneses or Mina, Melendez said, “Friends, I do not know yet, kasi I just want to take it one day at a time.”

Meanwhile, Melendez denied speculation that she and Yllana, with whom she has a son, have gotten back together.

She surmised that rumors of them being a couple anew stem from Yllana referring to her as “my wife” when he introduces her.

Melendez and Yllana’s marriage has yet to be annulled.

“But, yes, we are very, very good friends,” Melendez said.

Asked what her considerations are in finding a new partner, the actress said she would prefer if they share the same faith. “Si Jom kasi ngayon, sagradong Katoliko. I have nothing against his religion. But, kasi, I prefer na maging Christian din ‘yung magiging future partner ko.” (MNS)