SAN GABRIEL, CA – Two days after reports that China has overtaken Japan as the second biggest economy in 2010, Air China, the People’s Republic of China’s only flag carrier, announced that they are expanding their operations in the U.S. with the addition of another daily nonstop flight to Beijing. 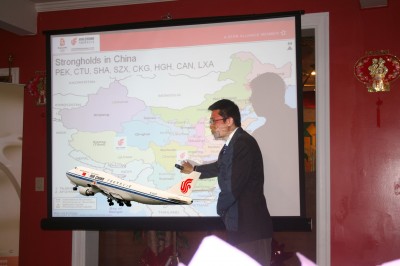 In a news conference held in this city that, along with neighboring cities of Alhambra, Monterey Park, Temple City and Arcadia, is home to thousands of Chinese nationals and Chinese-American residents, Air China officials told the ethnic Asian members of the media of the planned Los Angeles-Beijing expansion that will begin on Sept. 1 this year, complete with a PowerPoint and video presentation led by Air China Deputy General Manager for the Los Angeles Station, Rui Yang.

In an interview with Balita Media, Yang said the expansion means there will be two nonstop daily flights from Los Angeles to Beijing, each flight of which will leave at a different schedule within the day. He said this is a reflection of the increase of travelers going to China, including tourists of different national backgrounds from the U.S.

Yang said there has been a great interest from a lot of Sothern California residents to visit China for economic, tourism and cultural exchanges. And why not? Who doesnâ€™t want to see the only man-made structure that can be seen from outer space that is the Great Wall of China?

Although a visa is needed to visit the PROC, Yang said visa applicants can actually get approved in one day (one-day priority) while the longest wait will just be one week. He added that unlike in most if not all U.S. embassies or consulates, applying for a visa to China does not require an appointment.

Last year, Air China inaugurated its fully-owned building in El Segundo complete with a call center that actually answers your phone, Yang said. “We make sure that when you call it will be answered within 30 seconds, and with a live person on the other line.” Yang also said that aside from English and Chinese speaking staff, they also plan to add a Spanish-speaking call center because of the makeup of the Southern California market.

In a statement, Air Chinaâ€™s Vice President and General Manager for North America Dr. Zhihang Chi, “Our second flight out of LAX (the IATA code for Los Angeles) will allow passengers to conveniently and easily proceed to other cities in China, Asia and elsewhere in the world, effectively increasing our competitiveness, market share and penetration.” Dr. Chi added that “Beijing and beyond will be well served by this new flight, making Chinaâ€™s capital city a true global hub.”

Air China officials also said that additional flight will not only double the choices for passengers, especially for business travelers bound for Beijing or onward to other Chinese cities, but will also create excellent connections to such important Asian destinations as India, Vietnam, Philippines, Thailand and other Asian countries.

Air China Limited, the company behind Air China, was established in 1988. The airline, which has a network of 264 routes spread throughout Asia, the Middle East, South and North America with over 6,000 flights and a million seats available every week, is worth $20 billion. By market capitalization, according to the International Air Transport Association or IATA, Air China is the worldâ€™s largest airline.