ALAMINOS CITY, Feb. 14 (PNA) – The city of Alaminos in Pangasinan can now lay claim as the world’s underwater wedding capital when two couples renewed their marriage vows down the water of the Hundred Islands on the eve of Valentine’s Day on Sunday.

City Mayor Hernani Braganza, a scuba diver himself, officiated the renewal of marriage vows between Jayson Llavore and Myrna Gallinero, and Frederick Juanchon and Geraldine Gentozala using a sign language. 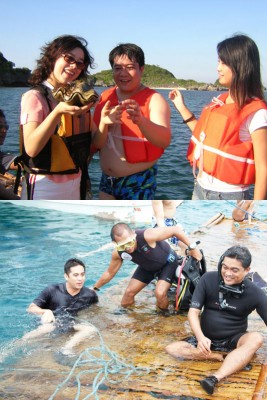 The couples signed their marriage vows on a tablet using a specially-designed pen that can be of use even under water.

The couples responded to the program “Lovin ‘n Divin at the Hundred Islands 2011,” being promoted to lure more tourists in the marine park.

Braganza also officiated the wedding of balikbayans Senen Juanchon and Carmelita Marcelo held in one of the caves in the Hundred Islands.

In full diving equipment, Jayson and Myrna, who are residents of Manila, renewed their wedding vows here for the second time in a row.

The lovely couple was actually the original pair who took part in last yearâ€™s inaugural of underwater wedding at Hundred Islands.

They, along with the Juanchon couple, discovered the underwater treasures and enjoy the refreshing deep blue waters of the marine mark as they strengthened the love that they both shared for years.

Balikbayans Juanchon and Marcelo, on the other hand, chose to renew their wedding vows at Cuenco Cave, as part of their 47th wedding anniversary celebration.

After the renewal of their wedding vows, the couples were serenaded by an acoustic band courtesy of Mulanay Experiential headed by Oton Santiago, one of the affair’s organizers.
“They are full of love when they exchange â€˜’ Dos’,” said Mayor Braganza. “We’ve seen it in their eyes…the way they expressed their love and commitment to one another.”

“Above all, they promised to each other that they will happily live ever after,” added the mayor who initiated the mass civil wedding on Valentine’s Day in 2005.

Dubbed as “Hundred Kisses at Hundred Islands,” this wedding ceremony is being held annually to lessen illegitimacy in the city while promoting the Hundred Islands to local and foreign tourists.

The program, which was initiated by the city government through the cityâ€™s local civil registry, is also considered as one of the Braganza administration’s lifetime gifts to the wedding couples as they tie the knot for free and going home with lots of presents.

Last Sunday’s underwater wedding served as a prelude to the 7th Mass Civil Wedding held Monday (Valentineâ€™s Day) for the first time at Don Leopoldo Sison Auditorium.
Organizers decided to change the venue of the event because of the unusual weather condition nowadays and at the same time, defray the couples, their family and guests from additional travelling expenses.

There were 95 couples who tied the knot Monday, only the second time that it did not breach the target 100 couples, according to city civil registrar Reynaldo Castro.
The slight decrease in the number of couples participating in this year’s mass wedding is attributed to the fact that this is already the 7th staging of the event, he added.