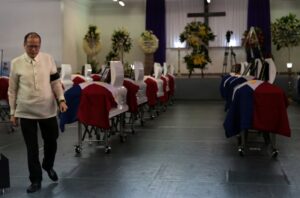 MANILA (Mabuhay) – Senate Majority Leader Alan Peter Cayetano on Thursday described as a “slap on the wrist” the recommendation of the Moro Islamic Liberation Front to sanction their erring commanders.

It added: ”The laxity exhibited by the two Base Commands, perhaps influenced by the over confidence in the relative peace obtaining in their communities brought about by the ceasefire agreement with the government and the signing of the CAB (Comprehensive Agreement on the Bangsamoro), should not go unnoticed. This attitude should not be tolerated.”

The report also cleared its fighters of alleged overkill in the deaths of 44 Special Action Force troopers during the Mamasapano clash on Jan. 25.(MNS)