Alex and Asiang: The Aristocrat family of restaurant’s story

Alex Reyes and Engracia “Asiang” Cruz were both born in the fishing town of Navotas, Rizal. In their youth, they both persevered and worked hard for a living, though the vibrant Asiang only finished her fourth grade, Alex became a prominent lawyer, who graduated from the University of the Philippines and worked in government such as Legal Counsel for the Court of First Instance and Court of Appeals, until he became Secretary of Justice during President Quezon’s time.

After they wed, both Alex and Asiang belonged to the circle of Manila’s elite and they loved to entertain. Their love for each other grew, producing a large family of 15 children. For them, each child was a blessing, so in July of 1936, through their circle of friends’ encouragement, they opened their first restaurant called ‘Lapu-Lapu.” right in front of St. Theresa’s Catholic School in Malate, on the first floor of their 2-story house. When their son Andy was born, they changed the restaurant’s name to Andy, but when Andy was growing up as a teen, he told his parents that his classmates always teased him of their restaurant’s name, to which then Dona Asiang said: “Bakit nahihiya ka ba sa mga kaklase mo na mga aristocrata?” Thus, the name “Aristocrat,” was born. 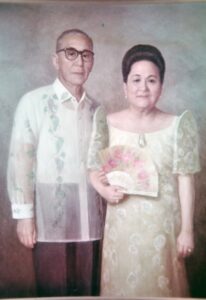 The Reyes family’s philosophy in running their restaurant was and still is: quality of service, dignity of labor and meritocracy. They treat all their employees like their own family that is why they have generations of families that work for them until the present time. They specialize in good, comfort meals such as crispy pata, mechado, pancit luglug, kare-kare and arroz caldo.

They continuously develop innovations in their restaurants in order to cater to the growing trends of their customer’s palates. They have a test kitchen, where their management staff can test food samples in order to maintain the quality of the “Reyes family’s” food brand.  Some examples of innovations and visions they introduced for example came right after the Japanese time in 1946, when they introduced their adobo sandwich to the American soldiers who bought their sandwiches from a rolling truck, or what is now called food trucks. They also moved to their Roxas Blvd., location which until now is their flagship location. And in 1950, the established the Aristocrat Beach Resort, which pave the way to their famous chicken Barbecue with Java Rice, on the premise that people who eat the BBQ on a skewer, can eat it with their hands. 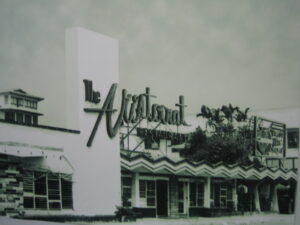 Now celebrating their upcoming 80 years in the restaurant business, current President Priscilla Reyes -Pacheco, who’s mother, Teresita “Mama Sita” Reyes, trained her children in learning the value of “hard work,” so in turn, she takes pride in managing seven Metro Manila Aristocrat locations, plus other branches in Subic, Zambales aid San Pablo, Laguna. Their group of family restaurants now also have bake shops and they have recently also added a Culinary School as part of their legacy for the younger generation.

If you’re planning to go home this holiday season, take advantage of Aristocrat’s 80 year Anniversary celebration by bringing a copy of their Ad in front of our paper for a 20% discount on your meal order from any of their branches or call their phone number:

So for those balikbayans going home for the holidays, stop by and enjoy the various home-cooked meals you were used to, or “lasang kinaugalian” (as their current ongoing promo phrase jingle), and visit your favorite, original Aristocrat Restaurant!  Happy holidays!