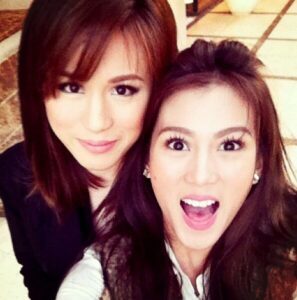 If there’s one thing that Alex Gonzaga really wants to do, it would be to star in a movie with her sister, Toni Gonzaga.

Alex admitted she has been dreaming of headlining a movie with Toni ever since she joined showbiz.

Does she already have an idea as to the roles she would like them to play?

Alex said she and Toni will not have a hard time working together because they really know each other well.

Aside from this, Alex said she is also looking forward to the big screen adaptation of her book, “Dear Alex, Break Na Kami. Paano?! Love, Catherine.”

“I am really looking forward to that,” she said. “Wala pang [cast] pero may sinasabi na ako sa kanila. We’re still in the process of [choosing] kasi.”

In a past interview, Alex said she would like Luis Manzano, John Lloyd Cruz and Piolo Pascual to be part of the movie.

The movie adaptation will be written by Antoinette Jadaone, who is behind other films “Beauty in a Bottle,” “Relaks, It’s Just Pag-Ibig” and “That Thing Called Tadhana.” (MNS)