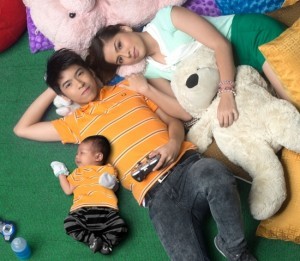 Teen actress Alexa Ilacad is smitten by reel partner Nash Aguas but she’s keeping the promise she made to her parents not to have a boyfriend until she’s 18.

Note that they were previously rumored to be an item but they denied it. If anything, they admitted to being quite close to each other even off-cam. When Nash celebrated his birthday last month, Alexa gave him a letter, brownies, and earphones. Last February, he gave her a Polaroid Instax camera for her birthday.

The two are cast as best friends in the new ABS-CBN series based on the Wattpad novel by Noreen Capili titled “Bagito,” which tells the story of a 14-year-old boy (Nash) who gets a friend (Ella Cruz) pregnant.