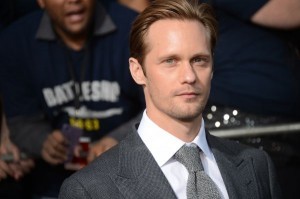 (Relaxnews) – David Yates is courting Alexander Skarsgard to play Tarzan in his upcoming blockbuster, reveals Variety. With four Harry Potter movies under his belt, the British director gets a chance to retell the story of the vine-swinging Lord of the Apes created in 1912 by Edgar Rice Burroughs.

The Swedish actor best known as the hero of hit TV series True Blood has yet to receive an official offer for the role in the Warner Bros production, tempers Variety.

Henry Cavill (The Man of Steel), Charlie Hunnam (Sons of Anarchy) and Tom Hardy (The Dark Knight Rises) are also under consideration for the title role. The winner will get to succeed to the likes of Johnny Weissmuller and Christopher Lambert as John Clayton III, an orphan who is raised by apes in the jungle in the wake of his wealthy parents’ death.

The movie will not depict Tarzan’s return to civilization, which was notably covered in Greystoke. Instead, Tarzan will be asked by Queen Victoria to investigate shady diamond traffic in the Congo helmed by a warlord. Warner Bros. is said to be courting Samuel L. Jackson for the role of George Washington Williams, a former mercenary on Tarzan’s side.

The production of Tarzan is set to start next summer and the casting process should be over by the end of 2012.

Kuh, Music and Magic gear up for Valentine show

Xian to work with Kim, Jessy in separate projects

Get Free Tickets to see Sarah Geronimo at the Pechanga Theater