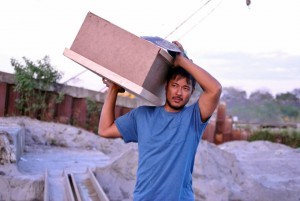 Directed by veteran filmmaker Joel Lamangan and written by Palanca awardee Jerry Gracio, “Kamkam,” is supposed to be a “study on the effects of corruption engendered by a patriarchal system upon the poor people.” It shows how “absolute power corrupts and destroys relationships within the family and the community.”

Co-produced by Ferdinand Lapuz and Dennis Evangelista, “Magkakabaung” and “Kamkam” were also exhibited at the Montreal World Film Festival in Canada last month.

Evangelista disclosed in a Facebook post that a French reviewer dubbed Dizon the “festival’s discovery,” raving over his performance in both “Magkakabaung” and “Kamkam.”

“For me, it’s his most honest, most subdued and heartfelt performance to date. He’s not acting in the movie, what I saw in our movie is Randy,” Evangelista said about Dizon’s performance in “Magkakabaung.”

“To date, it’s his 9th acting awards but the most significant since it’s Allen’s first international Best Actor Award.” (MNS)