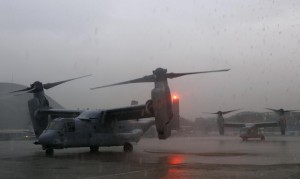 Two U.S. Marines V-22 Ospreys, ferrying personnel to help in the relief efforts in Tacloban City, are seen on the tarmac at Villamor Air Base in Manila November 13, 2013. Philippine officials have been overwhelmed by Haiyan, one of the strongest typhoons on record, which tore through the central Philippines on Friday and flattened Tacloban, coastal capital of Leyte province where officials had feared 10,000 people died, many drowning in a tsunami-like wall of seawater. (MNS photo)

MANILA (Mabuhay) – An organized distribution of international aid has been put in place for an orderly and efficient conduct of relief operations, Secretary to the Cabinet Jose Rene Almendras said in a press briefing of the National Disaster Risk Reduction and Management Council (NDRRMC) on Wednesday morning.

“It’s very important that everybody understands that operation para po no hiccups and we can be efficient in moving things a lot faster,” he said.

All international aid coming to the Philippines must first go through the Department of Foreign Affairs (DFA) upon landing in Cebu, the designated logistics support center for the super typhoon Yolanda relief efforts, he said.

Depending on what the offered aid is, the DFA will then pass on the information to other government agencies.

For instance, groups offering medical assistance will be processed by the Department of Health (DOH) and NDRRMC. DOH will account for the medical teams, recording the names of doctors and other volunteers involved, Almendras explained.

All incoming flights bringing volunteers should ideally land in Cebu. From there, they will be transported to the areas where they are most needed after assessment.

Relief goods such as food and clothing are to be brought to the Department of Social Welfare and Development (DSWD), Almendras said. They then decide where the goods will go, depending on the urgency and priority.

At the same time, DOTC Undersecretary for Operations Eduardo Oban, Jr., a former lieutenant general, was put in charge of the logistics center in Cebu. He and his team will decide how to transport these goods to the assigned location.

All aircraft should preferably land in Cebu, said Almendras. The ones allowed to land directly in Tacloban airport are aircraft no larger than a C-130 bringing goods that do not need repacking.

Although Tacloban airport has already opened, not all of its equipment are fully operational. They also lack the warehouses and logistical man power to repack goods.

Guiuan has also become a central hub for logistics. From there, all goods will be distributed to the eastern towns of Samar.

“C-130 flights to Guiuan will continue for relief goods, medical supplies, and everything because we will stock up Guiuan for a full operation,” Almendras said.

The road to the eastern side of Samar has also finally opened, according to the Department of Public Works and Highways (DPWH). “The way to Guiuan will not just be through air. By land na rin,” he said.

Meanwhile, DSWD Secretary Dinky Soliman has already flown to Ormoc, Leyte to start establishing a remote center there to process relief goods for the other Leyte towns. Goods will flow from Cebu to Ormoc.

The United States has made available ospreys, smaller aircraft which will be used to distribute goods from Tacloban to Ormoc and other remote sites. These aircraft are also meant to transport goods from Cebu to Ormoc.  (MNS)

‘A minus’ credit rating affirmation of PH’s economic strength