Amid confusion on standard-bearer, LP to stick together – solon 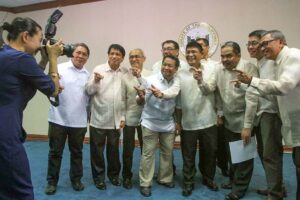 MANILA (Mabuhay) – A member of the ruling Liberal Party is confident the administration party would remain intact come 2016, amid reports that some members would deflect out of the party if it supports a losing candidate next year.

In an ambush interview on Tuesday, Iloilo Representative Niel Tupas Jr. downplayed an Inquirer report that said the bloc led by LP vice chair Speaker Feliciano Belmonte Jr. would pull out of LP if it supports a candidate who has no chances of winning in 2016.

Speaker Belmonte was a stalwart of Gloria Arroyo’s Lakas-CMD before he deflected to the ruling LP to support President Benigno Aquino III for the 2010 elections.

Tupas said because of traditional politics, some members might become political butterflies and deflect to other parties in every change of administration. But Tupas said the “core members” of LP would surely remain.

“Because of the dynamics of Philippine politics, some party members might go out. But we expect an overwhelming majority to stay and stick it out to the party based on principle. Alam nila na (they know that) this is not just a party of convenience,” Tupas said.

He said he remains confident that the ratings of Interior Secretary Manuel “Mar” Roxas II would improve so that the party would be united in supporting him as presidential candidate.

“We hope all party members would stick it out. Naniniwala kami na (we believe that) slowly and seriously the ratings of Secretary Mar is improving,” Tupas said.

The Inquirer quoted Speaker Belmonte as saying the LP’s presumptive bet Interior Secretary Roxas should step up his game or else neophyte Senator Grace Poe would be “unstoppable” in getting a landslide victory as president.

Roxas has been trailing at third or fourth place in the latest voters’ preference polls, while Poe has overtaken Vice President Jejomar Binay as preferred presidential candidate among prospective bets. Binay held the top post in the Pulse Asia and Social Weather Stations survey for nine months.

President Benigno Aquino III has talked with Poe to tour the country with Roxas, but Poe said she would only do it if Senator Francis “Chiz” Escudero,” her preferred running mate, could tag along.(MNS)