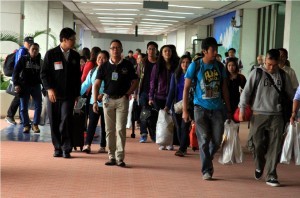 MANILA (Mabuhay) – Amid global infections such as Ebola and MERS-Cov, the Department of Health (DOH) is discouraging families of returning overseas Filipinos from welcoming their relatives in a “fiesta-like” way at the airport, to limit the number of people exposed to infectious diseases.

According to DOH spokesperson Dr. Lyndon Lee-Suy, families and friends of OFWs must be reminded to change their habitual practice of “bringing the entire clan” to the airport so that in case there is a passenger arriving with infectious disease, fewer people will be involved in contact-tracing later.

“I think we should just do away for a while with the big number of family members trooping to the airport as if they are going to a fiesta,” Dr. Lee Suy said.

He explained that the best approach is to limit the number of people meeting an arriving relative at the airport, with the others staying to do the welcoming at home.

The DOH spokesman noted that it will not do any good if all the relatives of an arriving OFW will be wearing face masks at the airport just to be sure they will be safe from infectious diseases like MERS-CoV (Middle East Respiratory Syndrome-Corona Virus).

“Wearing face masks, on the other hand, may also cause panic among the public because that may convey the wrong message or confusion that there is an alarming situation,” he said.

It may be recalled that the country’s first MERS-CoV scare took place in April 2014, when an entire family had to be quarantined for a period of 14 days after they welcomed a family member, a male nurse, from the United Arab Emirates.

The nurse initially tested positive for the virus before he returned home. Later on, he was found negative for the virus after confirmatory tests were conducted at the Research Institute for Tropical Medicine (RITM) in Alabang, Muntinlupa City.

The doctors at the RITM concluded that the patient had probably overcome the virus during his flight back home to the Philippines.

As of this date, there is no available cure for MERS-CoV.

The DOH spokesman said that returning OFWs should also be responsible enough to immediately proceed to a hospital or see a doctor at the airport if they notice that something is wrong with their health during the flight.

“If they (OFWs) feel some symptoms—like fever higher than 38 degrees, experiencing cough, sneezing, diarrhea—they should go directly to a hospital before they go home to avoid the possible exposure of family members or neighbors,” he said.

He also reminded that correct information should be written on the airport health declaration checklist once an OFW returns in the country so that in case there is a need for contact-tracing, the task will not be very difficult.

“As we always remind them, we (the government) cannot do the task alone, they (OFWs) or the public should also do their part to help by giving their full cooperation in the control of spread of any infectious disease,” Lee-Suy said.

He added that it will also be a good practice if one’s mouth will be covered by tissue or handkerchief when coughing or sneezing, especially if people are standing or sitting beside them.

The public, on the other hand, can do their part by keeping themselves clean or practicing proper hygiene and maintaining strong immune system as a way to shield themselves from emerging infectious diseases.

Among the ways to strengthen one’s immune system are having adequate sleep, eating nutritious food, drinking plenty of water, and doing exercises.

At present, the 32-year-old Filipina nurse who arrived from Saudi Arabia last Feb. 1 is the only confirmed case of MERS-CoV in the country.