Amid resignation calls, Aquino gets support from evangelical church leaders 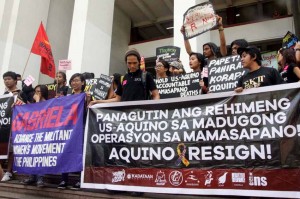 Thousands of students from the University of the Philippines participate Friday in a simultaneous walkout in campuses nationwide to call for President Aquino’s resignation. Different student organizations joined the protest calling for justice, accountability, and change to commemorate the 1st month of the Mamasapano incident. (MNS photo)

During the prayer meeting at the Malacañan Palace grounds, Jesus is Lord (JIL) Church leader Bro. Eddie Villanueva urged Aquino on behalf of other evangelical church leaders not to quit his post.

“We are beseeching you to fulfill your duty, your constitutional duty to finish your term,” Villanueva told Aquino during the prayer gathering.

Villanueva also assured the President of “all-out support to protect the Constitution.”

Before this, the JIL leader read Bible verses on submitting to government authorities and warning against rebellion.

Villanueva’s son, Joel, its the director-general of the Technical Education and Skills Development Authority and is Aquino’s close pal. (MNS)

‘An Evening to Remember’