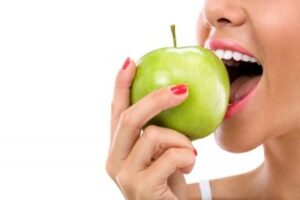 Snacking on an apple before grocery shopping could lead to healthier food choices, according to a new study.
©Lucky Business/Polyvore

(Relaxnews) – Eating an apple upon entering the grocery store led to shoppers buying 25 percent more fruits and vegetables than those who did not in a new study from the Cornell Food & Brand Lab.

“What this teaches us,” says Aner Tal, PhD of Cornell, “is that having a small healthy snack before shopping can put us in a healthier mindset and steer us towards making better food choices.”

Tal and co-author Brian Wansink conducted three experiments to make their case, the first of which involved 120 shoppers.

They were given at random an apple, a cookie or nothing at all as they arrived at the grocery store.

In the second experiment, 56 participants who were given either a real cookie or a real apple to eat and then shown 20 images containing two products each.

They were asked to select which one they would purchase and each image featured one healthy item and one unhealthy item, calorie count being the distinguishing factor.

Results were similar to the first experiment, with the cookie eaters opting for a disproportionate amount of unhealthy items.

At this point, the researchers wanted to see whether framing a food item as healthy or not could influence shopping choices.

Dividing 59 participants randomly into three groups, they tested the controversial practice of promoting foods as healthy when, in fact, the healthiness of that food is either offset by high sugar or absent entirely.

All participants were asked to perform a virtual shopping task, choosing between healthy and unhealthy foods.

Ironically, those who were given the chocolate milk labeled healthy and wholesome made healthier selections during the virtual grocery shopping exercise.

What influences shoppers, according to the study, is the perceived healthfulness, rather than the actual healthfulness.

The researchers recommend shoppers to eat a small, healthy snack before going to the grocery store in order to reduce hunger and point you in the right direction when it comes to making healthy choices.

The study was published Wednesday in the journal Psychology and Marketing along with another by Dr. Wansink that says getting hooked on health foods depends on their being convenient, well-presented and seeming like the natural choice.