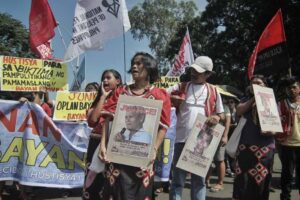 — Lumads and human rights advocates protest outside the House of Representatives during the deliberation of 2016 Department of National Defense budget. The groups called for an independent investigation into extrajudicial killings and human rights violations in Lianga, Surigao del Sur allegedly perpetrated by paramilitary forces. (MNS photo)

MANILA (Mabuhay) – The leader of youth activist group Anakbayan slammed President Benigno Aquino III for his response to allegations that military and paramilitary groups are killing indigenous peoples in Mindanao.

Vencer Crisostomo, national chairperson of Anakbayan, said the President engaged in “classic doublespeak” when he responded to queries regarding the killings of Lumad people in Mindanao.

“Aquino’s statement is classic doublespeak which emboldens the paramilitary and military in its campaign targeting civilians. It reveals Aquino’s complicity in the militarization of communities and the murder of Lumads and activists under his military Oplan Bayanihan. Blood is clearly on Aquino’s hands,” Crisostomo said in a statement.

During a roundtable discussion with journalists and editors of Philippine Daily Inquirer, President Aquino said it is not the policy of his government to kill innocent lumads, following allegations that the military and paramilitary groups were involved in the killing of 3 indigenous people.

“There is no campaign to kill anybody in this country. There is a campaign to go after everybody who commits crimes, regardless of who they are,” Aquino told Inquirer editor and journalists during round table discussion.

“Serving the people does not entail killing any of our citizens.”

For Crisostomo, the President’s response “revealed his complicity” in the militarization of lumad communities, and the subsequent displacement and killings of IPs who are opposed to mining and logging activities.

“It looks like Aquino is pretending to not know about the killings. In any case, he has not issued a word of condemnation, not even a word of ‘concern,”” Crisostomo said.

“What he said is dangerous. If read between the lines, he is essentially justifying the militarization and killings by acknowledging that there is indeed a ‘campaign’ but this is against ‘everyone who commits crimes.’ Is he saying that those targeted by military campaigns are ‘criminals’? Isn’t he essentially echoing the military line that the Lumads being targeted are NPAs? This is exactly the logic of the military and paramilitary groups which are targeting Lumad communities.”

Public outrage over the plight of lumads reached its peak after three IPs, including a school head, were gunned down in Lianga, Surigao del Sur last week.

Human rights group Karapatan accused the paramilitary group Mahagat-Bagani forces of being behind the killing. It likewise accused the military of causing the displacement of lumads in Mindanao.

The military has denied the existence of the paramilitary group.

It has also accused several lumads of empathizing with the New People’s Army, saying some facilities harboring lumads, such as the Davao City Haran mission sanctuary of the United Church of Christ of the Philippines (UCCP), is under the control of leftist groups. (MNS)