Andi Eigenmann, Jake Ejercito back together? 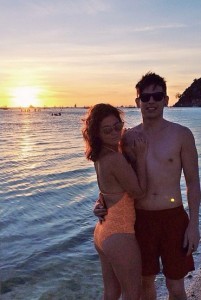 Amid reports that they are no longer together, actress Andi Eigenmann posted a new photo showing her with Jake Ejercito, the son of Manila Mayor Joseph Estrada.

In her official Instagram account, Eigenmann posted a photo showing her and Ejercito in Boracay during the long Labor Day weekend.

“And in that moment, I swear, we were infinite. #LaBoracay2014,” she wrote in the caption, quoting a line from the best-selling book “Perks of Being a Wallflower.”

Last month, Eigenmann herself confirmed that she is not on good terms with Ejercito, following weeks of speculation that the two are no longer together.

However, she also said at the time time that she wants to patch things up with Ejercito, with whom she has been romantically linked since 2011.

The two, while always seen in public together, never confirmed being officially a couple, although Eigenmann, who has a two-year-old daughter with former boyfriend Albie Casiño, has been vocal of her feelings for Ejercito, saying at one point that what they have is “real love.”

Eigenmann has recently been romantically linked to former child star Tom Taus, the brother of actress Antoinette Taus, although she has denied this, saying they are childhood friends.

Currently, Eigenmann is part of the hit series “Dyesebel” with Anne Curtis. (MNS)

Back to work for Vhong Navarro